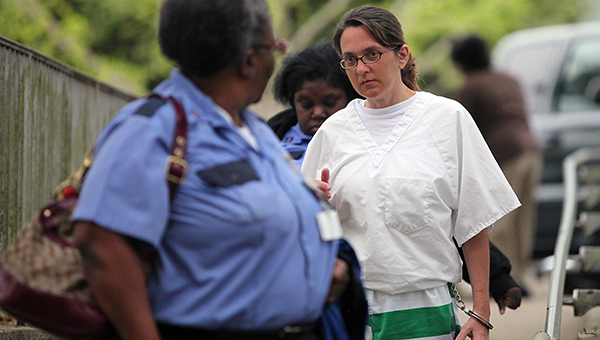 The Warren County Board of Supervisors were surprised to learn that jailed former Circuit Clerk Shelly Ashley-Palmertree was drawing her state retirement.

During Monday’s board meeting, former board attorney Marci Southerland gave the supervisors an update on last week’s ruling by Hinds County Chancery Judge Dewayne Thomas. He ordered Palmertree to pay more than $818,251.75 in restitution for excessive salary above the state-set cap for circuit and chancery clerks and questionable subcontractor payments to her father and predecessor in office, Larry Ashley.

“The only remaining issue is whether Western Surety is liable for the $300,000 in bonds they have written,” Southerland said. “We know they are and we believe that the case law is in favor of that.”

The supervisors were relieved to finally have a judgment in the case and bring the court proceedings to a close.

“Whatever the bonding company pays comes off this $818,000 and then she will bring a money order or a cashier’s check,” District 1 Supervisor John Arnold asked.

“That is optimistic,” Southerland responded. “There is some money being held by the Chancery Clerk, Donna Hardy, pursuant to Judge Thomas’s order, some $22,000 to $23,000 in payroll money that was owed to Palmertree when she was in office. We want to deal with that and I will propose to fill a motion with Judge Thomas to ask to allow that money be granted to Warren County to go against that $818,000.” Southerland said.

“We will enroll that $818,000 in the Chancery Clerk’s office and also the Circuit Clerk’s office, that way if she sells her home or any other assets we can find, we have that judgment enrolled and can move forward with collection.”

District 2 Supervisor William Banks asked if that judgment would be dismiss able in bankruptcy court.

Southerland suggested that if Palmertree pursued bankruptcy that the board fight dismissal in court proceedings.

Board of Supervisors president Bill Lauderdale asked if she could file for and receive retirement benefits while she is in jail.

Arnold asked if Palmertree could shed the judgment and continue to draw state retirement.

Southerland told the board it would be a very complicated process to do so.

PERS was established by the state Legislature in 1952 to provide benefits to eligible Mississippi public employees working for state agencies, universities, community colleges, and public schools, as well as counties, cities, and other participating political subdivisions.

Five bills were proposed during the recently concluded legislative session that would have denied benefits to people convicted of felonies of embezzling public funds.

Four of those bills were introduced in the House and one in the Senate.

One of those bills was proposed state Rep. Bill Kinkade from Byhalia.

“In light of the 23 convictions of elected officials in the past two years, I tried to forward some legislation limiting access to retirement until restitution was fully paid by the convicted,” Kinkade said. “It passed pretty much unanimously in the House and died in the Senate.

“Believe me, I’m still on this,” he said. “I don’t think it’s right, the residents of Mississippi deserve their full restitution.”

State Rep Randy Rushing, author of a similar bill, echoed Kinkade’s sentiments, but has been working to pass such a law for several years.

“We’ve had corruption in Mississippi in the past, and part of the PERS system is funded by taxpayers’ dollars and personally I felt like it rubs salt in the wound for someone who has abused their authority to turn around and then draw a retirement check that the taxpayers of Mississippi have to supplement,” Rushing said. “It would serve as a deterrent.”

“I’m not out to punish families and I fully support that employee being refunded the money they paid into the system, I just feel like it isn’t right for them to continue to receive taxpayer money when they’ve defrauded the taxpayers.”

At this time, Palmertree’s retirement is exempt from garnishment.