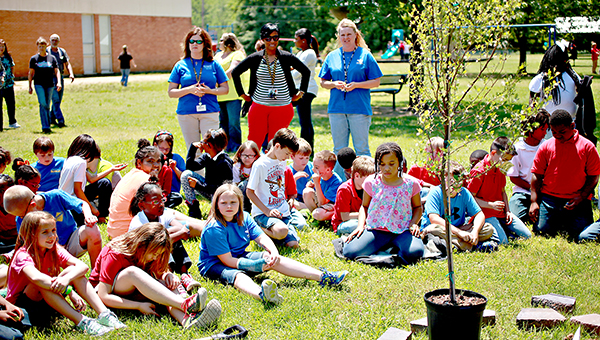 MEMORIAL: Beechwood third-graders prepare to plant a tree Friday in memory of their classmate Autumn Giles, 9, who died April 14 in a car wreck.

When Beechwood Elementary third-grader Autumn Giles passed away in a car accident April 14, a void was left at the school. Suddenly, there was an empty seat on the bus, a missing smile from the classroom and no little girl doing cartwheels on the playground.

Friday, Autumn’s friends and classmates planted a tree in memory of her at the school’s playground.

Autumn was a good friend to each and every one of the third-graders, said Melissa Rouse, an interventionist at the school who taught Autumn kindergarten.

“She was only a third-grader, but she made such an impact on everyone in the school with her smile and her positive attitude,” she said.

Rouse said Autumn was going to be greatly missed by everyone at Beechwood.

“Autumn was a super sweet little girl who loved everybody,” she said. “She loved to play, and turn cartwheels and run around and cheer.”

Rouse said several students said the place they chose to plant the tree was a good spot because that’s where Autumn liked to play.

“What we wanted to do was find something you guys you look at and remember her and all the good times that you had with her,” she said to the third-graders. “This tree is going to continue to grow, so next year when you come back as fourth-graders, it will be a little bit taller.”

The tree, an American Snowbell Tree, can grow to be 15 feet tall.

All the students in third-grade painted rocks in memory of Autumn Giles to place at the base of the tree, Beechwood Elementary School principal Tamikia Billings.

“The wonderful teachers came up with this idea because we really wanted something to remember her by,” she said. “We wanted to be sure we did something positive.”

Billings said it’s something a lot of the students have never dealt with.

“We try to help them with that transition of dealing with death,” she said. “That is hard.”

Autumn’s grandfather Michael Giles said he wanted to thank everyone for a beautiful ceremony.

“Autumn was a good child,” he said. “She touched a lot of people’s lives.”

Autumn’s grandmother Patricia Giles and great-grandmother Ruby Buford both said they wanted to thank Beechwood and Autumn’s friends and classmates.

Relay for Life doubles in size