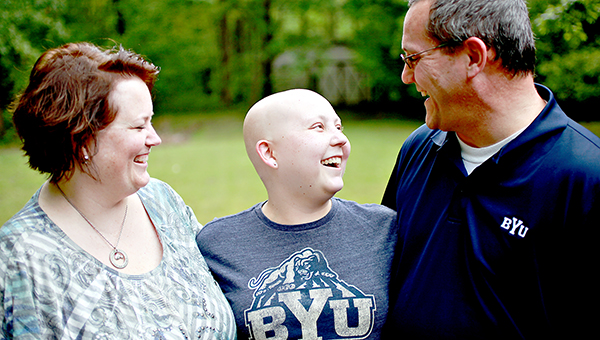 REMEMBERED: Afton Wallace, who died Sunday will have a scholarship to Brigham Young University established in her name.(Justin Sellers/The Vicksburg Post)

Since Afton Wallace was a little girl, she knew she wanted to attend Brigham Young University.

Afton, who died May 24, realized she was getting sicker in the recent months, and one of her biggest fears was not being able to go to college in the fall, her father Robert Wallace said.

“Her biggest fear other than dying was that she wouldn’t be able to go to school,” he said. “One of the times she talked to me when she was sick she told me ‘Daddy, I’m scared I’m not going to be able to go to BYU.’”

Robert said he knows how important BYU was to Afton, and he and the rest of Afton’s family want to help other students from Vicksburg and the state of Mississippi be able to attend the school that meant so much to Afton.

“Our medical expenses of course are going to stop,” he said. “We should have enough funds to pay for whatever medical expenses and funeral expenses with insurance, but the real issue has nothing to do with our expenses — What I’m interested in is what’s the legacy of Afton.”

“If you’ve seen the video of her when she received the letter from BYU, and she was accepted, you saw how giddy she was,” he said. “Then when she got the scholarship letter she was giddy.”

Robert said he and his family want that for other children and they want to do it in a way that honors Afton.

“It makes your heart break because you want your kids to achieve their dreams,” he said. “Clearly this was her dream.”

Afton’s younger sister, Kaylynne’s dream is to go to BYU-Idaho, Robert said, adding his three other children would probably choose to attend BYU as well.

“We’ve never forced any of them,” he said. “It’s a big part of our family. The association with the church is a big part of why they would want to go to BYU.”

The Wallaces are members of the Church of Jesus Christ of Latter-day Saints on Indiana Avenue. Robert said the student population at BYU is not exclusively Latter-day Saints, but they do make up a large part of the student body. The school has a fairly strict honor, dress and grooming codes.

“For people who want to have an exceptionally good education in an atmosphere that is about as far away from a normal college experience as possible, it’s an excellent choice,” he said. “There’s no drinking, no alcohol and a very clean environment, and Christian values are high and honored.”

Robert said the goal is to create an endowed scholarship that will continue to provide opportunities for students from Mississippi to be able to attend BYU.

“That’s what she wanted to do, so we would like to provide a way for others to do this,” he said. “It is a fantastic school, and it was her dream, so in honor of that we would like to use those funds to as a mechanism for other students to realize their dreams.”

Robert said obviously BYU is not the No. 1 destination for college-bound students in Mississippi, but using stipulations, the family is going to try to keep the scholarship close to home.

“We would like for it to go first to someone from Vicksburg, then open it up to the state of Mississippi,” he said.

Robert said when he first posted to Facebook that Afton had passed away, the post reached more than 100,000 people.

“If everybody donated $1, we would have enough money to have an endowed scholarship for someone to go to college,” he said. “It’s a way to leave a legacy to honor the dream that she had.”

Afton’s funeral will be held Saturday at 1 p.m. at City Auditorium. The funeral was originally planned for Glenwood Funeral Home, but a change of venue was required to accommodate additional guests from various circles in Afton’s life including swimmers from around the state, friends from high school and members of the statewide Latter-day Saints community.

The family has asked that in lieu of flowers, donations be made to the scholarship fund at http://www.gofundme.com/tf5qfc.