It was his 28th birthday, and William “Bill” Mayberry was rushing to a relative’s house in Grapevine, Texas, so he could hear the sweet sounds of home and wishes of a happy birthday from the wife and two children he had left here in Vicksburg.

It had begun to rain as he was driving on Texas 114 north of Dallas-Fort Worth International Airport on Aug. 2, 1985.

He must have thought the roar was thunder.

Delta Air Lines Flight 191 was caught in the same storm. A microburst struck the plane. It crashed in a field north of DFW, bounced back into the air and as it was crossing that stretch of Texas 114 where Mayberry was driving alone, one of the plane’s engines crushed his black 1971 Toyota Celica. 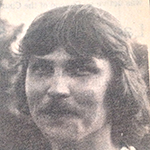 If ever a death was tragic, it was his.

The Warren County license plate on his Celica was about all that wasn’t flattened in the crash. The image of his car ran in newspapers around the country and on television.

His family knew he was killed before his body was ever identified due to the media coverage of the crash that killed 134 people aboard the plane and Mayberry, who was in the wrong place at the wrong time.

“The kids have been real quiet, and I’m not sure they know how to handle it,” his widow Terri McKay Mayberry told the Vicksburg Sunday Post two days after his death. “They saw the picture of Bill’s car in the paper and asked if their daddy had been squashed.”

Even I have trouble looking at the photos 30 years later.

Mayberry had attended Warren Central High School and worked at Kamman Motors in Vicksburg. He quit a week before his death to move to Texas to work as an electrician at the airport near where he would die. The job didn’t work out, and he found work as a mechanic at a Toyota dealership in suburban Dallas.

He wanted a better life for his family. They had planned to join him within two weeks.

“He was bound and determined to make our marriage and this family work, and he did as good a job as anyone could ever do,” his widow said in 1985.

I tried without success this week to track down members of Mayberry’s family — his widow, his two children, Barbara, who was 10 when her father died, and William Jr., who was 8. I found his brother Robert Joe Mayberry Jr. listed as living in St. Charles, Mo., but was unable to find his phone number. William’s father died earlier this year in Missouri.

Wherever they are, I want them to know that Bill Mayberry is gone, but he is not forgotten.

Give credit where credit is due