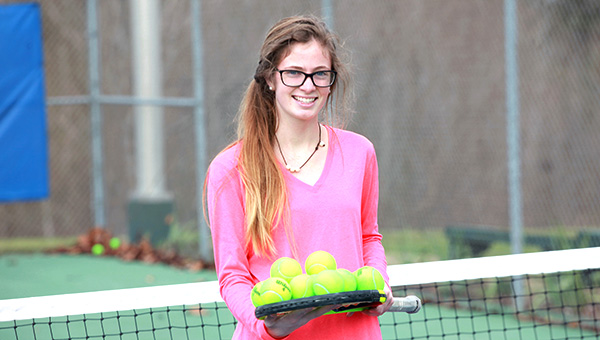 Lauren Davis has been ranked the No. 1 player among novice players in the state by the Mississippi Tennis Association. (Alex Swatson/The Vicksburg Post)

Lauren Davis served her way to the No. 1 ranking among first-time tennis players in the state of Mississippi.

The Warren Central junior is one of seven players in the last four years to claim the accolade from the Mississippi Tennis Association in its novice division. The MTA ranks players based on how well they compete in tournaments, and has a number of divisions based on age and skill level.

Davis began playing tennis in the summer of 2014 and decided to get involved because of a teacher’s influence. Lindsay Finn encouraged Davis and other girls to try out due to the lack of girls playing.

Since trying her luck, Davis has grown into the sport well and said the best part about her game is her returns.

“I’m better at the forehand than anything else,” Davis said. “It’s stronger, more powerful and has more spin on it. My backhands are very inconsistent.”

Davis actively competes in matches on the state’s youth circuit, and practices with Warren Central’s tennis team to stay sharp and keep up with competition.

However, she does get frustrated when she doesn’t quickly learn a new concept.

“Say I do a serve wrong and I have to learn a new serve I like it to happen now,” Davis said. “I’m not really patient and that’s frustrating at times. Tennis is a hard sport to play.”

Being named the top-ranked novice player in Mississippi has only made her more competitive and increased her work ethic. She also tests her skills against boys who hit harder and faster than her, making it easier for her to return against her female competition.

Over the summer, Davis played in her most competitive match against West Monroe’s Ferron Dollar at the River Hitters tournament at Halls Ferry Park. Davis lost in straight sets 7-5, 7-5, but both sets went to long tiebreakers.

“We went five games to five games; six games to six games. You have to win by two points in a tiebreaker and it would be 10-8 each time,” Davis said.

Aside from being relieved from the stress of trying to win, she gained confidence from the loss.

“I mean, I guess sometimes when I’m playing against really good people, I feel like giving up sometimes,” Davis said. “I didn’t think I had a chance to even getting that close to beating her. I realized I could do more than I think I can.”

The difference between playing high school tennis for Warren Central and recreationally is the levels of comfort and competition.

“I feel like at Warren Central when I play competitive matches against other schools that it matters more,” Davis said. “In tournaments I feel like it matters … but I feel more consistent at school.”

Davis wants to use tennis as an outlet to relieve stress, which coincidently, gives her a chance to better her game. If she’s having a bad day, she can take a basket of balls and practice her serve or drop shots to herself.

Instructor Rick Shields has watched Davis go from “a fledgling” to someone who can play competitive tennis.

The biggest attribute about Davis that Shields enjoys working with is her drive and work ethic.

“She doesn’t mind putting the work in. She wants it to come fast but I keep emphasizing it doesn’t happen like that,” Shields said. “It’s not microwave. She understands that but she wants it. She’s willing to work for it.”