Timeline, feasibility of opening old U.S. 80 bridge in the works 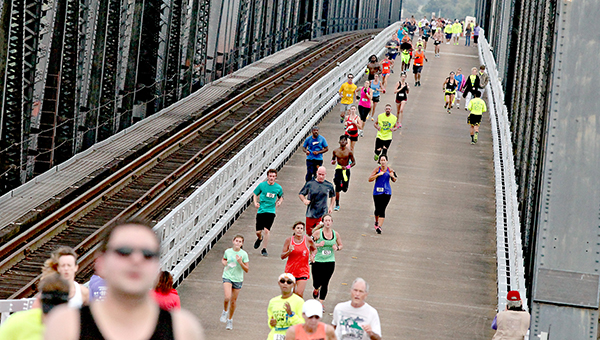 POTENTIAL YEAR-ROUND ATTRACTION: Runners head toward the finish line last year during the 27th annual Over the River Run on the old U.S. 80 Bridge.

Friends of the Vicksburg Bridge is getting some help in its quest to convert the old U.S. 80 bridge across the Mississippi River into a pedestrian walkway and bicycle path and park to draw tourists to the area.

The MDA Warren County Ambassadors, an organization of community leaders working with the Mississippi Development Authority to improve economic and community development, met Monday at the Vicksburg Convention Center with representatives from the Friends group to discuss developing a plan to make the proposed project a reality.

The 1.6-mile, 86-year-old span is owned by Warren County and managed by the five-member Vicksburg Bridge Commission. It was closed to vehicles in 1998 over safety concerns presented mainly by the Louisiana Department of Transportation and Development. Louisiana maintains the Interstate 20 bridge and stopped allocating money to the bridge on west side of the state line after it was closed to vehicles.

Kansas City Southern Railroad leases the track on the bridge from the county.

The bridge’s driving surface, or deck, is a popular site for special events like the Over The River Run, which began in 1989, 5K walks, the Bricks and Spokes ride to promote downtown and from 2009-13, a breast cancer benefit featuring bras strung along the old road’s railing. Wheelchair bikers and bicyclists have also crossed the old bridge for a “Walk, Roll and Stroll” benefit for Living Independence for Everyone, a Jackson-based charity for the disabled.

“We want to open the bridge for walking and bicycle traffic year-round, not just special events, and there is a lot involved to do that,” said MDA ambassador and Friends member Linda Fondren, adding she believed the group should begin a media campaign to build public support for a bridge park and tell railroad and public officials about the park’s potential economic impact.”

Friends member Buddy Dees said Mayor George Flaggs Jr., members of the Warren County Board of Supervisors and railroad officials met in 2014 to discuss the proposal.

Railroad officials, he said, “Were open to the idea. Of course, they had safety concerns that we feel confident we can address.” He said a 1999 study commissioned by the Warren County Bridge Commission addressed improving the bridge to make it safer for walkers and cyclers.

“We still have that study,” Dees said. “We are looking for funding.”

He called the bridge “a real jewel” that would attract tourists and walking and running clubs and cycling clubs whose members would want to cross the bridge “and enjoy that huge vista we call the Mississippi River.

“There’s a history of people utilizing the bridge for recreational purposes, and we would like to see that continue. The fact that MDA has some money and the fact that this is one of our resources, and frankly, I’d like to see the county get more bang for its buck.”

Kirklin said the ambassadors’ plan will present to MDA “is a stepping stone. We have to first get our timeline and then the feasibility study and a public relations plan.”

She said the proposal will be sent to MDA in about three weeks for approval. Information on funding was unavailable.

Two efforts since 1998 to fund a bicycle park on the old bridge in Vicksburg with federal highway money have petered out due to vehement opposition from Kansas City Southern Railroad citing safety as a reason. The most recent was in 2006, when KCS opposed it in writing to state and federal legislators from Vicksburg, the Mississippi Department of Transportation and then-Gov. Haley Barbour.

A coalition of local government and tourism promotion entities had applied for grant money via MDOT to finance the project.