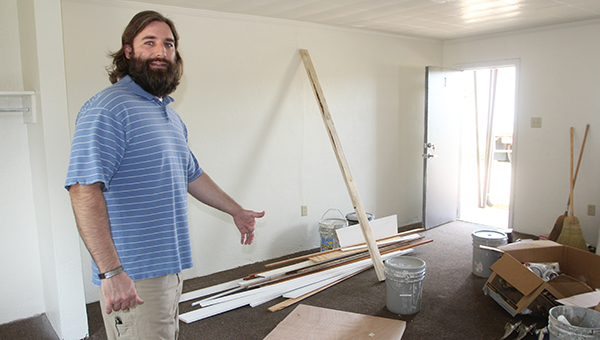 TRANSFORMATION: Joel Dimmette, executive director of Lifting Lives Ministry, explains how a room will look once renovations are complete at the old Hillcrest Motel on U.S. 80, turning it in to a shelter for homeless families.

Joel Dimmette is trying to help people who are invisible to the world — homeless families.

“You won’t see them, they’re not picked up in the point in time count, we understand that,” the executive director of Lifting Lives said.

“When we started investigating the problem, we realized how bad it was,” he said. “Before then, we had no idea. I didn’t even know what family homelessness was, I thought surely it could not exist, and once we saw it and began interacting with families, you really couldn’t turn away.

“This seems to be our calling. This seems to be some very tough work, but that’s how we began. We started a non-profit in 2012, and all of our approval because it was bigger than what our church could do.”

Lifting Lives Ministries tries to help homeless families by providing temporary shelter and counseling to get back on their feet.  It began as an outreach ministry at the Bypass Church of Christ on U.S. 61 North, when Dimmette, Dr. Willie Nettle and Nellie Caldwell decided they wanted to do more for Christ by serving the community.

“We talked with United Way to see what the community really needs, and we started working with Mountain of Faith Women’s Restoration Shelter, River City Mission, and what we came to realize is a huge need to work with homeless families,” he said. “The shelters were always getting calls, there was really no place for homeless families to go, certainly, and they would be broken up.

“They were scared, they were cold, and when you said, ‘we don’t have a place,’ they would disappear.”

After “much prayer and conversation” the trio realized there was a problem in Vicksburg that needed to be addressed.

“We work with some hotels to get rooms at a discount,” Dimmette said, “but it is expensive.”

He said they also try to work with other shelters and agencies to pool funds together for a temporary fix for a couple of days until they can help the family get with another family member in town or another city.

“There have been times we we’ll let them stay at the family life center at church,” he said. “We have a disaster relief facility, and we’ve allowed some families to stay there for a period of time, we do what we can and every family’s a little different.”

To help meet expenses, Lifting Lives opened the Warehouse, a thrift store in 2014, to supplement donations. The store, Dimmette said, “probably provides 90 percent or more of or annual funding. Requires additional fund pray community will step up. We’ve got a core group that’s done so much, but we need the so many other people to get involved and help us with this.”

Besides working with lifting lives, Dimmette is an ordained minister who preaches at Bypass Church of Christ.

“I was agnostic; I really struggled with faith,” he said. “I converted to Christianity Sept. 23, 2004. I wanted to know more, so I started going to Bible college, seminary, and never looked back. I got my bachelor’s degree in Biblical studies. I’m a thesis way from finishing my master’s but this work (the shelter) sidetracked that.”

He said the decision to help was inspired by the Gospel of Matthew, “And in Chapter 25, just serving others and how we respect humanity, that is another way we as Christians can serve loving our neighbor and being kind.

“We can’t solve all the world’s problems, but we can love everyone, and we can look for those who are often invisible or outcast and serve them in the way Christ has served us. That’s what prompted the outreach ministry.

“Homeless families are among the invisible,” Dimmette said. “We spent the first year of our existence just trying to prove to people who were interested in helping us that homeless families do exist right here. But the very fact there’s no place for them to go, even when they do call, and what’s sad is, these families don’t want to be on the street. They want to be independent. They’re not looking for a hand-out, they’re looking for a hand up.

“One thing we have learned, is there are some fundamental differences between homeless families and what you normally think about with single people who are homeless,” he said.

“Basically, when you start living paycheck to paycheck, you can get behind through crisis or bad money management, and then you’re out in the street, and that starts affecting jobs and other things.

“They’re not lazy and they just need a little break from the storm, so it’s a wonderful opportunity to serve them in a physical way, but it also gives us an opportunity in a Christian ministry to ask them what God is really doing in their lives and think about their decision and the good choices and bad choices they made and the changes they have to make in the future.”

The shelter, he said, will provide food and counseling, assessments to find out what’s going on with the lives of the parents and make sure the children go to school. It will also offer job placement assistance and help with financial management.

“I have been asked several times if I believe this is a calling,” he said. “I’m a very conservative person. I’d say this is a calling, that’s why me and my family are so dedicated to it. It hasn’t gone as well as we planned, but we’ve gone hard at it. People often ask if it’s worth getting involved. I believe in leading by example.”