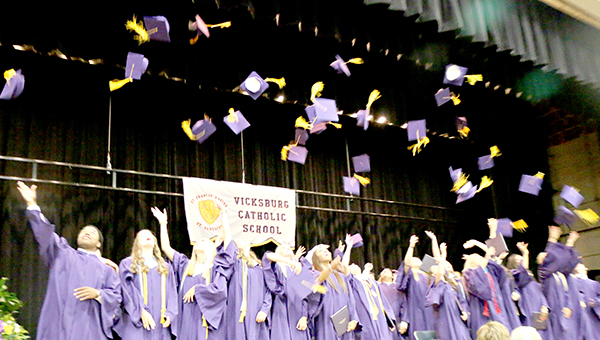 And while being able to walk at graduation is a time-honored tradition, that almost wasn’t a reality for one of those students.

On April 23, James “Jimbo” Halford was involved in an accident and had to spend five days in the hospital before being released in a wheelchair.

“I just wanted to be able to walk in and out with my class,” Halford said. “We’ve been together since we were in Montessori. I was in a wheelchair for the rest of school and exams, but I knew I could walk by today.”

Halford’s family history with the school goes back four generations, and he is the 28th person in his family to graduate from St. Aloysius. He even shares a middle name (Aloysius) with his now alma mater.

“I’m the last one to come through until me or my sister sends our kids there,” he said. “It was cool to have my family watching today since they all graduated from St. Al before me.”

Principal Dr. Buddy Strickland experienced his first graduation as administrator of the school, but the ceremony was special for another reason, too.

“I got to spend the entire senior year with my grandson and watch him graduate,” he said. “But I had to tell him and the rest of them bye.”

But it wasn’t just his grandson Rett Verhine that Strickland was sad to see go, he said.

“I had a chance to sit with all those seniors and sit and talk with them,” he said. “I’ve come to genuinely love all those kids. It was hard to say bye to them. I watched them walk in unsure of themselves, and I watched them walk out as mature young people who had a clear focus on where they were going and what they wanted to accomplish.”

Before parting ways, the students heard some encouraging words from the class’ top two.

Salutatorian Katelyn Brock dared her fellow classmates to be the absolute best versions of themselves, and valedictorian Katie Martin reminded everyone the best way to get better, in swimming or in life, is focusing on the little things.

Of the award winners, one is chosen as the winner of the Robert K. Foley III Memorial Scholarship. This year’s winner was DeMichael Harris.