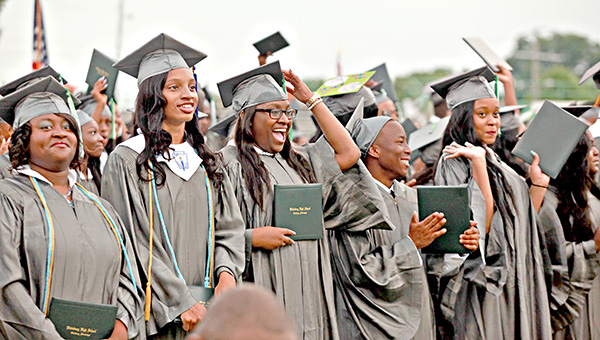 CELEBRATION: Vicksburg High’s Class of 2016 celebrates near the end of Thursday’s graduation ceremony at Memorial Stadium.

The now former students met for one last time Thursday evening for commencement at Vicksburg Memorial Stadium where it was announced the class of 2016 earned more than $1.5 million in scholarships.

Students expressed an assortment of bittersweet emotions as their high school career came to a close.

“You know, I love high school because they show me love, but I’m ready to just go on with my life,” James Jay Stirgus said. “But I really do love Vicksburg High.”

Stirgus, the president of Chick-fil-A Leader Academy, said the class of 2016 was really special.

“I’m going to miss the unity we were having,” he said. “This class really unified the school.”

“It’s overwhelming,” he said. “It’s been a long four years, but I’m ready to get my diploma.”

Valedictorian Rakaiyah Winters left a number messages for her classmates including never stop learning, be kind to others and never underestimate yourself.

Lori Brown was surrounded by family as they cheered on De’Aries Brown as he walked across the stage.

Vicksburg High alumna Kim Coomes watched her third and final son Zac Coomes graduate from the school she once attended. She said it’s still surreal her youngest son has graduated from high school.

“While I am very proud of all they have accomplished scholastically, I am most proud of the wonderful men they are,” she said. “Knowing what hard workers they are and the fact they do things for other people, that’s what really makes me proud.”

“Of course I’m a little sad that this chapter is over, but being the mom of such wonderful men makes me really excited for what will happen in the future,” she said. “I just hope it doesn’t go by as quickly as high school did.”