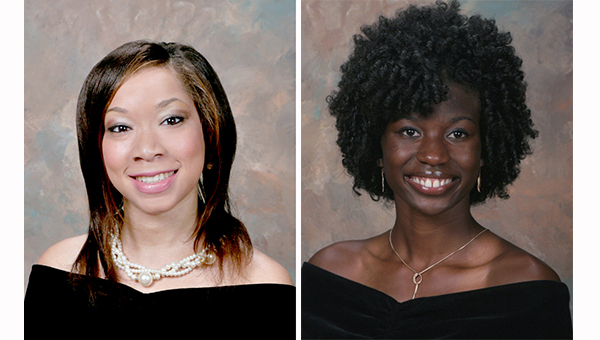 Thursday evening, Vicksburg High said goodbye to the class of 2016 at the class’ commencement exercises held at Vicksburg Memorial stadium.

While there were many distinguished graduates, two of the 198 graduates stood out above the rest: valedictorian Rikaiyah Winters and salutatorian Keiyana Gaskin.

Winters, the daughter of Avril Brown and Carl Winters, said the path to academic success begins with having the end in mind.

“I chose the right classes, and I didn’t do anything other than what it took to be valedictorian,” she said.

Winters said she thinks she’ll miss her friends and being a part of the band the most now that her time at Vicksburg High is over.

“Band took up a lot of time,” she said. “The best moments I had in high school were with band. I was with them all the time.”

This fall, Winters will attend Mississippi State University, where she is eligible for a $6,000 scholarship for being Vicksburg High’s STAR student.

She plans to study chemical engineering, and she said she’s looking forward to meeting new people.

“I made color guard at MSU,” she said. “I’m excited for that, just traveling with the band.”

Winters said she wanted to thank her parents, teachers and the administrative staff at Vicksburg High.

Gaskin, the daughter of Fred Gaskin and LaTonya McKennie, said it takes motivation to succeed.

“I had motivation from my parents and others around me,” she said. “If someone has someone motivating them, they should listen.”

Gaskin said she was also internally motivated to do her best, which helped her stay focused.

“I would have competitions in class to see who could make the highest grade or do the best on a test,” she said. “I didn’t stress, and I continued to have fun. A little studying every day goes a log way.”

At Vicksburg High, Gaskin ran track and played basketball, and she was involved with the National Honor Society, Mu Alpha Theta, Just Say No, SADD, the Environmental Club and Student Council. Gaskin was the president of the senior class, and she attends House of Israel Hebrew Cultural Center.

As an alumna, Gaskin said she will miss her friends and her teachers at her alma mater.

“I’ll miss the vibe that they gave me,” she said. “We had fun here, and some will say we’re a bad school, but I had a great time at Vicksburg High. It was a great experience. Overall, Vicksburg High, I couldn’t have chosen a better school. It helped me better myself and succeed.”

In the fall, Gaskin will attend the University of Southern Mississippi on a full track scholarship. She plans to study business and law, and later she hopes to compete in the Olympics and become a lawyer.

“The people in my class, I’ve known most of them all my life. We were neighbors and went to school together in elementary and junior high. Some were cousins and relatives,” she said.

“To go to USM, I think I’ll have a new environment to meet other people. It will probably boost my confidence in myself because I know I’ll have to step my game up because I don’t know everybody there.”

In parting, Gaskin wished to issue some final words of advice, “keep God first, stay focused and always believe in yourself.”