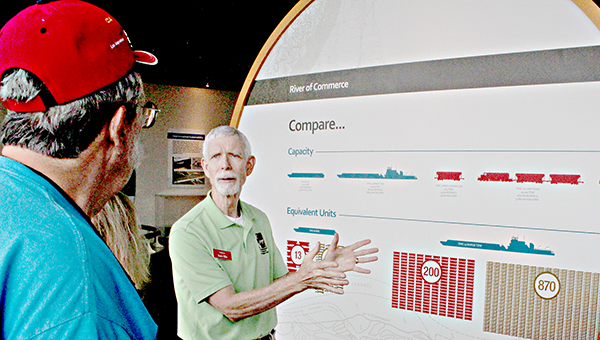 It was during the American Revolution that George Washington appointed the first engineer officer to the Army June 16, 1775. Now, the U.S. Army Corps of Engineers is made up of more than 37,000 civilian and military personnel working together in public works, most commonly known for dams, canals and flood protections.

“The (museum) provides visitors with a unique look at life surrounding the mighty Mississippi River,” according to the museum’s welcome. “Through both interactive and static displays, visitors can explore the river’s past, examine the science behind water movement and even learn about the future plans for the Mississippi Valley.”

Crowd favorites at the educational center include a 1,515-gallon aquarium with native and invasive fish species, an outdoor scale model of a section of the Mississippi River and the decommissioned Motor Vessel Mississippi IV, which the USACE used as a towboat and inspection vessel.

Park Ranger Kathy Mabry said it’s an honor for her to be a part of the USACE and to help tell the story of the history between the Mississippi River and USACE.

“It tells the story of our country and our founding fathers,” she said. “It’s so much fun to share that story and so much more how we have expanded our responsibilities under the authority of the U.S. Congress.”

“At the museum we tell the story of the past, the present and the future of the U.S. Army Corps of Engineers,” she said. “Since I am a park ranger, and I have served as a park ranger for years, one of the primary things we do here too is promote water safety.”

Mabry said anyone in Vicksburg who has not yet been to the Jesse Brent Lower Mississippi River Valley Museum should make the trip downtown to check it out.

During rain, the motor vessel is closed to the public, Mabry added.

���It’s a blessing that every day this museum can stay open,” she said. “If it weren’t for these volunteers, we wouldn’t. We have more than 30 volunteers who staff the museum on a daily basis from all walks of life.”

Editor’s Note: This is the second in an ongoing series highlighting museums in Vicksburg.