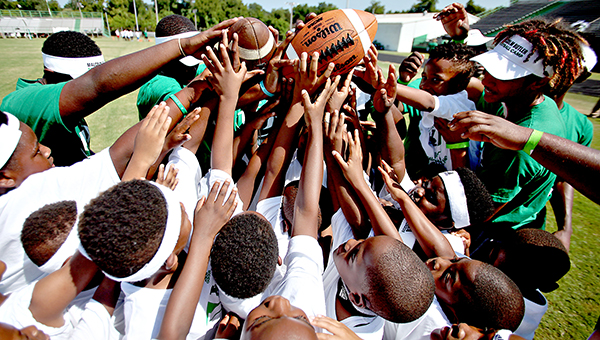 Campers and staff come together before breaking for water during the 2015 Malcolm Butler football camp. The second edition of the camp is scheduled for Saturday morning at Vicksburg High’s Memorial Stadium. (File/The Vicksburg Post)

New England Patriots cornerback Malcolm Butler will return to his hometown to pass down football knowledge he’s gained heading into his third season in the NFL.

The second annual Malcolm Butler Football Camp begins at 7:30 a.m. Saturday at Vicksburg’s Memorial Stadium. Children in first through eighth grades will learn the basics of football to enhance fundamentals of catching, running blocking, and passing.

“It won’t be any tackling, but we’ll show the do’s and don’ts,” Butler said. “We’ll make sure the kids have knowledge of those categories.”

The camp will run until noon. Campers must have pre-registered to participate.

Butler looks at being able to host his camp and have the community support as an honor. More than 200 children participated in last year’s inaugural camp.

“I felt loved and like they cared. I felt supported and I’m just trying to give back the same way. It’s an honor to have all those kids and parents sign up for my camp,” he said. “I’m truly blessed and I appreciate it.”

About 250 campers will make their way to Memorial Stadium Saturday. He’s confident in the camp having success equal to last year’s, although he’s willing to improve upon any hiccups that occurred during his first camp during this go-round.

Butler’s message to the children at this year’s camp is achieving your dreams. Butler knows all about that.

Butler was once kicked out of Hinds Community College before getting a second chance and going on to become a Division II All-American at West Alabama. He then signed with the Patriots as an undrafted free agent before the 2014 season and helped the team win Super Bowl XLIX against Seattle with a last-minute interception at the goal line.

Butler became a full-time starter in 2015 and was selected for the Pro Bowl, although he opted not to play in the game.

“No matter where you come from or where you start, or how rough your situation is, you always have the opportunity to achieve when you put your mind to it,” Butler said. “Anything is possible, just do the right thing and everything will work out for the best.”

He also wants to stress the importance of academics to his campers.

“School comes first before all of this,” he said. “It’s just a part of life.”

As a different way to thank all of his sponsors for their role in bringing the camp to life, Butler will have an invitation-only sponsors mixer at Ameristar Casino on Friday night.

Registration for the Vicksburg Soccer Organization rolls through Aug. 21, yet as the adage stands, “the early bird catches the... read more