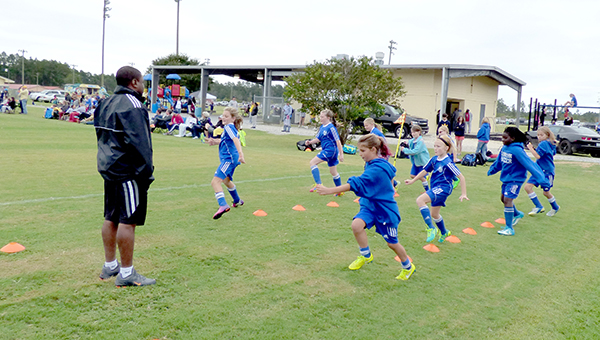 Cannon Soccer Club coach Maurice Gilliam, left, watches his U11 girls team warm up for their opening game in the Gulf Coast Classic. Registration for the Vicksburg Soccer Organization’s 2016 fall season is now open online at vsosoccer.org. (Submitted to The Vicksburg Post)

Registration for the Vicksburg Soccer Organization rolls through Aug. 21, yet as the adage stands, “the early bird catches the worm.”

The first week of practice begins Sept 5, followed by the first game of the season Sept. 10. The season concludes Oct. 29.

Registration is available online at vsosoccer.org.

“Fall is our slightly bigger season than spring,” said first-year VSO president Jason McKenna. “If you need help registering we have our info at the vsosoccer.org. We’re happy to help anyone with the registration process.”

For those interested in a more competitive team, the Cannon Cadets provide an extra level of competition above the recreational side. Cannon is the VSO’s select program, which participates in competitive tournaments across the state.

“It’s kind of above recreational soccer for those kids primarily U10 and above,” McKenna said. “What we have is a developmental program for anyone who’s U8 and under.

“They can get an additional day of training, they can actually start to work with their Cannon coaches and if they decide they like soccer and have an aptitude for it and parents want to make the time investment, they can start training more and getting on their level of skills in anticipation of trying our for these teams.”

Enthusiasm is high for VSO this season, as a host of changes have swept the organization.

McKenna, who previously served as treasurer for the program, was elected as president. Jay Lindsay handles the public relations aspect of the club, and there’s a new director of coaching in Michael Guidry. Guidry was the varsity boys’ coach at Vicksburg High from 2012-15.

“I’d really be remiss if I didn’t thank the outgoing board members who have, body and soul, have given to VSO and built it up to what it is. Our outgoing president Chelsea Witten has done a fabulous job. She set us up for success.”

Guidry’s personal approach to coaching youth soccer is to find the game within the players he coaches.

“Too often in youth soccer in the United States, we want our kids to play the game we see on TV,” Guidry said in reference to professional and national tournaments like Euro, Copa and the English Premier League. “But that’s not the game kids 5 through 12 need to be playing, nor is it the one we should be promoting in our youth soccer communities.

“Soccer is a fluid game with infinite, ever-changing problems. My goal as a coach is to give youth players the technical, psychological and social tools to solve problems as they occur on the field, and then giving them the positive environment to learn.”

McKenna said there’s also a new board coming in with four new members. It’s brought a fresh approach to the program as a whole.

“We have a lot of new talent and energy. We have a new director of coaching that we’re expecting great things from,” he said. “He’s got a pretty good vision about how to transform soccer.”

The bar is set high for this new group to continue ushering in success for the VSO.

McKenna doesn’t want to be the person who drops the ball, but his main focus is getting more feet on the field. He plans to make a considerate effort to do more recruiting through the schools and community to help kids understand how fun the game is.

“I want to be the president that helps bring more kids into it,” he said. “Really that’s what we’re about. There’s not a person past, present or future that’s not all about getting kids out there to play soccer.”

“The thing I’m most excited about is having the kids out there on the field,” Lindsay said. “It’s just a lot of fun to see them having fun and enjoying themselves out there. It’s a time they get to be out there and be kids. They enjoy the sport a lot.”

Registration for the Vicksburg Soccer Organization’s fall 2016 season is available online at vsosoccer.org through Aug. 21. The season begins Sept. 10. Registration fees for the youth league range from $60 to $90 depending on age, and the league is open to players ages 4-16.

Vicksburg High’s softball past, present and most recent will descend upon its toddler-aged field Saturday. Through the creative idea from... read more