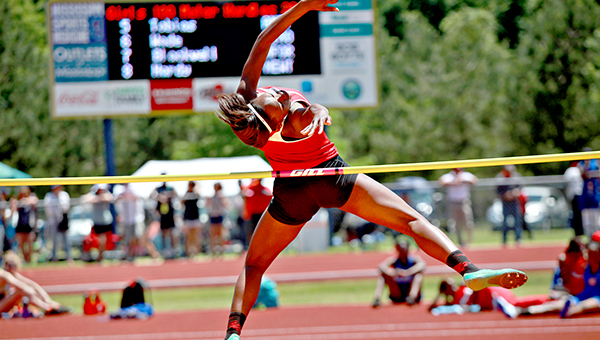 Warren Central’s Raven Thompson tries to clear the bar while competing the girls’ high jump Friday at the MHSAA Class 6A state track meet in Pearl. Thompson finished third in the event.

The leg strength Warren Central’s Raven Thompson developed through ballet classes at Debra Franco’s School of Dance has served her well on the track.

Thompson has qualified for the USATF National Junior Olympic Track and Field Championships in Sacramento, Calif, but will travel to the AAU Junior Olympic games in Houston. While both are impressive accomplishments, the road to get qualify for California and Texas were slightly different.

Louisiana State University hosted the USATF qualifying event. It was here that Thompson had early troubles with her form in high jump.

“On my first jump for high jump it was kind of rough. Going into it I had to loosen up but after the first jump I was ok,” Thompson said.

After the initial mishaps, she realized the problem. Instead of coming at the bar in the shape of a “J,” she approached it head on, not giving her the speed she needed.

“I didn’t curve hard enough and fast enough to get over the bar. The third time I went out some and I came in faster,” she said on eventually clearing 5 feet for second place.

To qualify for the Junior Olympic games in Houston, Thompson medaled first in high jump and third in triple jump in Covington, La. The scarce competition for the high jump event was relaxing as the triple jump was more competitive.

“It was four people all together in high jump, but two didn’t show up so it was only two competing,” she said. “Triple jump was long because we had three jumps in prelims and three jumps in finals.”

Thompson added that the distance needed to make the finals was 30 feet.

All the runners cleared the benchmark with the lowest jump recorded amongst them at 33 feet. The first place jump went the distance of 39 feet.

“There was another girl that jumped a 34 (feet). She jumped the same jump as me but one of her other jumps was better than mine so she placed second and I placed third,” Thompson said.

Thompson knows there’s always someone striving to be better than her and is humbled about her success.

After taking a week off from the track, she picked up training at the beginning of this week to prepare for Houston. She’s in her second year with the Mississippi Heat and has been involved with the sport since the seventh grade.

It’s also a shared experience between Thompson and her mother Sonya Washington, who also participated in high jump.

“She’s a good jumper,” Washington said. “When she was playing basketball she jumped and landed well. Her ability to jump was already there.”

Being able to watch her daughter is an exciting experience for Washington.

“(She’s) just a lot better than I was and all the time it’s exciting.”

Past athletes and coaches of the Vicksburg Warren School District should be honored. However, it requires a little help from... read more