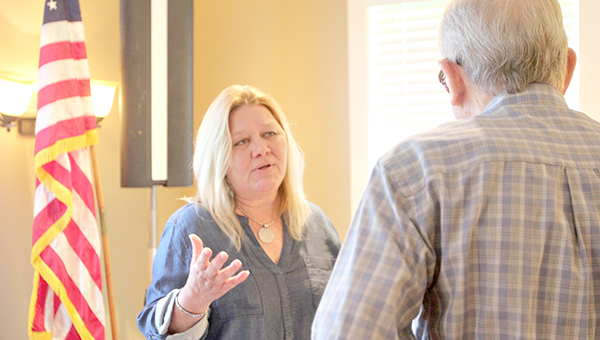 SHELTER SAVES INNOCENT LIVES: Vicksburg-Warren Humane Society president Georgia Lynn talks to Lions member Bob Cunny after the Wednesday meeting at Toney’s Restaurant where Lynn told the club about the shelter and how it serves the community.

The good news is the number of stray, homeless and unwanted pets taken in by the Vicksburg-Warren Humane Society in recent years has experienced a steady, although small, decline.

However, the Humane Society needs the community’s support to continue its work to save innocent lives.

At Wednesday’s Lions Club meeting, Lynn shared what the shelter does for animals and how it serves the community.

The organization has been in the community for 35 years and the last 20 of those years have been at its current location on U.S. 61 South. Lynn took over as president of the Humane Society in September 2003.

“When I started down there it was broken. The bills weren’t getting paid. There was no money in the bank. There were no membership roles and so I just started working on it little by little and I determined you have to run it as a business,” Lynn said.

The Humane Society is an open admissions shelter that takes dogs, cats, horses and more.

“We typically don’t turn anything away,” she said.

But that can be a problem because, she said, people don’t like to spay and neuter their pets, which leads to overpopulation.

Lynn started keeping records in 2004 and tallied a total of 2,202 animals that were taken in by the shelter that year alone.

In the first six months of this year, Lynn said the humane society has taken in 535 animals.

“I’m hoping this will be the first year in 12 (years) that I’ve been keeping these records that we’re going to get below 1,000 animals,” she said.

The drop in intake animals is attributed to the organization’s advocacy to spay and neuter and the society’s relationship with other agencies like Mississippi Spay and Neuter in Jackson, which runs a transport that will pick up animals from the Warren County Courthouse in the morning, spay and neuter the animal at the clinic and deliver them back to the courthouse by the evening.

“The ordinance doesn’t say you can’t have a vicious dog, it just says if you’ve got one, you better keep it in your yard, on your property,” she said.

Now the humane society is contracted independently through the county to pick up those animals with a court order, which was not an option before the ordinance.

“If a dog viciously attacked you, you had no recourse but a civil suit,” she said. “There was no one to go out and pick that vicious dog up and impound it.”

Lynn said the humane society is a kill facility, but she refers to it as a low kill facility because most of the euthanized animals are put down for being aggressive or for being sick. She said shelters were meant to be temporary solution until the animal can be placed in a home.

“I think no kill facilities are just as sad because I do not want to see a dog or a cat living in a cage forever,” she said.

To adopt an animal from the humane society, she said it is mandatory to have the animal spayed or neutered. Lynn said the humane society has a 27 to 30 percent adoption rate, which beats the national rate of 17 percent.

“I think we’ve been really successful,” she said.

Fickled showers bless some, while others wither away

Summer showers are leaving some in the farming, wildlife and forestry industries doing a happy dance, and others are doing... read more