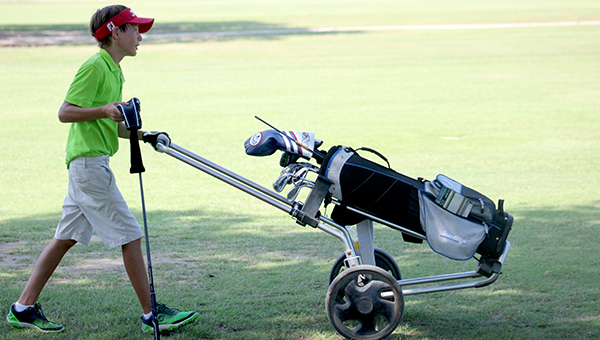 Bryson Whitaker wheels his clubs to his seventh hole during the first day of the Warren County Junior Golf Championship at Clear Creek Golf Course in Bovina.

Fresh and familiar faces of Warren County took to Clear Creek in an effort to improve their golfing talents.

“It’s pretty even all the way across. I got about three or four in each (age group),” Kent Smith said.

The championship also made way for younger players in Frances Thames, Chase Tucker and novice Bryson Whitaker to get good practice in nine holes.

“It’s good experience,” Smith said about the championships impact on the younger golfers. “We have a lot of these 10-, 11-, 12-year-old boys who are just starting to play, and the girls. Tournaments are a lot harder than just playing on your own for fun.”

After day one there’s not much separation between the golfers.

Curtis and Riveros are tied at 74 in the boys 14-18 age group and Whittington shot a 77. Chase Tucker and Joshua Larsen tied at 43 followed by Trace Dailey one stroke behind for third in the boys 12-13 group.

Frances Thames shot a 50 to lead the girls 11-14 group. Elizabeth Keen sits in second place shooting a 53 and Ellie Koestler with a score of 60.

The boys 9-11 group also saw a tie between Will Keen and Caleb Tucker at 49 with Carson Smith finishing the day with a 56.

Whitaker, who just picked up the game about three months ago was nervous competing in his first tournament but playing alongside Chase Tucker – who is also a recreational baseball teammate – eased the tension with jokes in between holes.

Through his first seven tournament holes, he wasn’t comfortable with his swing.

Whitaker arrived early Thursday morning to get some last-minute practice putts and drives. His goal was to shot below a 40 but ended day one with a 50.

He found the game while playing at a friend’s house and became addicted.

Once he was able to save enough money for his own set of clubs, he wasted no time in making the purchase.

And since that first swing, he’s been addicted.

“It’s just a sport either you really have to be a part of it. It’s not like baseball where you have pretty much everybody watching you,” Whitaker said. “Golf there’s not that many people watching, you’re kind of playing by yourself.”

As part of the United States National Park Service’s 100th celebration, it is challenging Americans to find a national park... read more