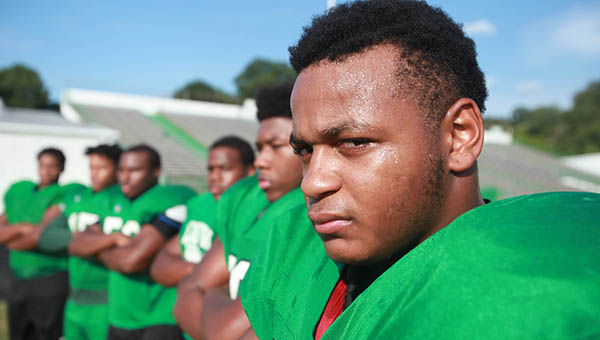 Vicksburg High defensive end Brandon Kees puts on his game face while teammates Montrae Edwards, Jomon O’Neal, Michael Sullivan, D’Anfernee Battle and Dee Madison look on. The group forms the core of a Gators defense that improved by a touchdown a game last season, and will play a big role in the team’s success this year as well. (Ernest Bowker/The Vicksburg Post)

With new leaders, a defensive coordinator who knows the talent of his players and a young core of rising juniors, Vicksburg High’s defense is on the brink of reaching its full potential.

The 2015 Vicksburg Post Defensive Player of the Year Jomon O’Neal led the team in sacks last season with 13. He and Nick Anderson, then sophomores, combined for 122 of the Gators’ 600 total tackles.

While O’Neal’s sacks will garner most of the attention, Anderson, Michael Sullivan and Brandon Kees do the little, yet important things that greatly influence the team.

Sullivan and Kees are gritty defenders whose biggest contributions can’t be measured in counting stats, although they do have their share of those. The two linemen combined for 11 sacks and 87 tackles in 2015. Their main job is to tie up blockers and allow the linebackers to get to the football.

“Mike made some of the biggest plays of the season. He was a high-energy guy against Warren Central, made a lot of fumbles in district games,” Vicksburg’s defensive coordinator Billy King said. “Brandon had a lot of key plays, especially in the Red Carpet Bowl. He sealed the win with a tackle for loss and he’s the biggest body we have on the defense and he eats up a lot of blocks. All those guys complement each other in what they do.”

Not only do the defenders complement each other, but the trust, faith and selflessness they have for one another has been apparent in summer workouts and in conversations about the unit.

If one player makes a big hit, it inspires and riles up the others to do the same.

“We’re getting each other better. Competing out here amongst each other,” Anderson said. “’Making each other work harder, getting strong and faster, mentally tougher. We depend on each other.”

Anderson added that no player is viewed more importantly than the other, and if one doesn’t do their job then it throws everything off.

King, a 14-year coaching veteran who is in his second season with the Gators, feels he’s surrounded by the best collection of talent he’s ever worked with. Vicksburg went from giving up 26.5 points per game in 2014 to 19.3 per game in 2015. He said his players and a speed-based scheme led to the improvement.

“I like to attack, so we molded a scheme their talents can fit into,” King said. “They bought into the system and ran with it. The product we produced last year speaks for itself.”

This summer gave King a lot of time to focus on 7-on-7 drills to evaluate individual talent.

As the Gators are undersized but athletic on defense, the scheme King has implemented makes good use of what O’Neal, Sullivan and the rest of the Gators do well.

“We’re going to do a few things great instead of a lot of things decent. Our coverage is simple. We’re very athletic, that’s no secret,” King said. “We’re going to play a lot of man, smother receivers, get them off their routes, disrupt the quarterback’s timing. We want to be very aggressive in what we do.”

While King said his expectations of being better than last year might seem cliché, it’s very reasonable. The biggest focus during the offseason was staying low in the trenches, communicating with one other and working to avoid offside penalties.

This year his goal is to play the run better and continue to be excellent in the pass rush. The back end is going to cover and he’s excited to have Anderson and Fabian Gilmore as new starters on defense.

“If we can mature a lot and be better on the run — if you watched us, and anyone who saw us play, we were great against the pass but we had our challenges against the run because we were so light,” King said. “These kids have gotten stronger, they’ve gotten bigger, their football IQ has risen and they’re a little bit more comfortable in the scheme. When they’re more comfortable they can play a lot faster and even improvise on some things.”

The Gators open the season at home on Friday night against defending Class 5A champion Wayne County. It will begin at 8:30 p.m. as the second game of the Red Carpet Bowl. Warren Central and Oak Grove play the first game at 6 p.m. at Memorial Stadium.

Tickets: Tickets are $10 in advance, and are available at Warren Central and Vicksburg High Schools and Junior Highs, the Vicksburg Warren School District athletic department on Mission 66, River Outfitters or Michel’s Music. Tickets are $12 at the gate.

Clear Creek needed a dominant performance and a miracle comeback in Sunday’s match play round to keep the Warren County... read more