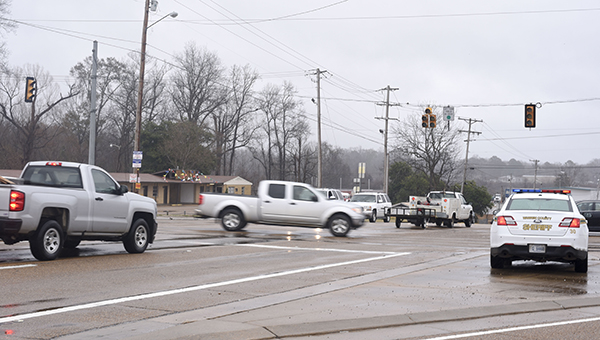 A Warren County deputy patrols the intersection U.S. 61 North and East Clay Street where power has been out due a substation feeder being lost at 11:03 a.m. Saturday. There are 744 customers without power and there is no known time of restorations. (Courtland Wells/Vicksburg Post)

An equipment failure at Entergy’s East Vicksburg Substation was the cause of a power outage blacking out a large portion of the east side of Vicksburg Saturday, Entergy customer service representative Sheila McKinnis said.

The blackout occurred at 11:03 a.m. when a breaker at the substation went out, cutting power to 744 customers.

At 12:37 p.m., Entergy switched service to an alternate feed until the broken breaker could be repaired.

“They shouldn’t lose power unless something else happens,” she said. “It’ll be on the alternate feed until the repairs are made.”

Sunday, McKinnis said the problem had been repaired.

The outage impacted a large portion of Mississippi 27 and East Clay Street including the Outlets at Vicksburg, the YMCA, Beechwood, Warren Central High School and other areas served by the substation.

McKinnis explained the outage was like a circuit in a house that tripped and cut power in the entire home, but this large circuit cut power to a substation.

The outage was the second time during December power was cut to the area.

Dec. 18, 2,138 customers in the area around Interstate 20, Mississippi 27 and Porter’s Chapel Road served by the substation were without power for several days when a tree fell on a transmission line to the substation, knocking it into a ravine.