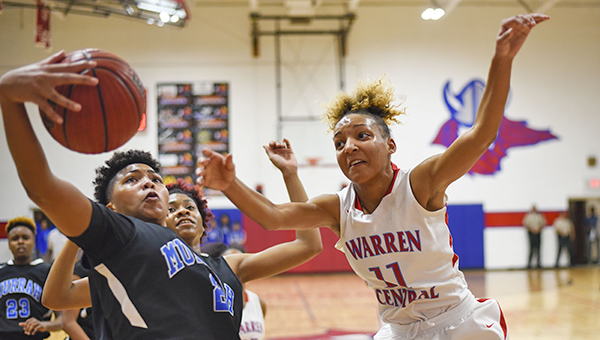 After two victories against Murrah this season, Warren Central couldn’t make it a clean sweep.

Murrah finally got the best of the Lady Vikes, winning 46-42 Tuesday in a matchup of contenders for the Class 6A girls’ basketball championship. Warren Central had won the first two times the teams played, at the Jackson Public Schools Tournament in December and then again in Jackson last month.

“It’s hard to beat a team three times in a row,” Warren Central coach Jacqueline Martin-Glass said. “We beat them twice this year. I knew they were going to come in with revenge on their mind, and I thought they played well, hit some shots and got to the basket. A couple times they got easy shots that we usually don’t want to give up.”

The fourth quarter started with the teams tied at 31 and playing with a lot of emotion. Thirty seconds into the quarter Kacey Bradford hit a shot to put the Lady Mustangs up by two, and within the next minute both Te’Asia Sims and the Warren Central bench were given warnings. Martin-Glass felt Murrah was not getting called on fouls.

“I felt like there were some opportunities I think the refs missed, but that’s his judgment. I didn’t think the judgment was in my favor tonight, and I got warned because I thought it wasn’t. But that’s basketball,” she said.

The Lady Vikes then calmed down and focused on their game. While they were able to tie it up again with four minutes left, they never took the lead again even with a 3-pointer by Cocoa Fultz with two minutes to go that brought them within three.

“I think we played hard, but late in the game I think we had some ill-advised turnovers. I think three times or four times in a row, with about two minutes or so on the clock, we turned the ball over and didn’t get a shot at the basket. And that hurt us,” Martin-Glass said.

Murrah’s Bradford scored 13 points, and Jamaica Almonds had 10.
T.T. Sims scored 15 points for the Lady Vikes and fouled out in the final minute. Amber Gaston scored 12.

Murrah got off to a fast start after the teams were tied at four with five minutes to go in the first quarter. The Lady Mustangs extended their initial lead to 12-6 with two minutes left. Glass attributed Murrah’s success to Gaston coming out of the game with an injury, taking away a lot of height and the team’s best defender in the post.

“Without her in there using her arms blocking and deflecting shots, that hurt us. We gave up about six points when she got hurt,” Maritn-Glass said.

“Basketball is a game of runs. They made a run early, but we stayed focused, stayed with our game plan,” Maritn-Glass said.

In the second quarter Murrah got out to as much as an eight-point lead, and again Warren Central stormed back. WC used a 10-2 run to end the half tied at 21.

“We were able to go into halftime tied up, almost like starting the game over again,” Martin-Glass said.

Warren Central finally drew first blood to start the third quarter, but Murrah didn’t let it last as the teams went back and forth from tied to the Lady Mustangs leading throughout the quarter.

“(We) came out, got a little flat early, gave up a couple easy layups, which put us down by four,” Martin-Glass said.

The Lady Vikes head to Lanier on Friday night for the final game of the regular season.