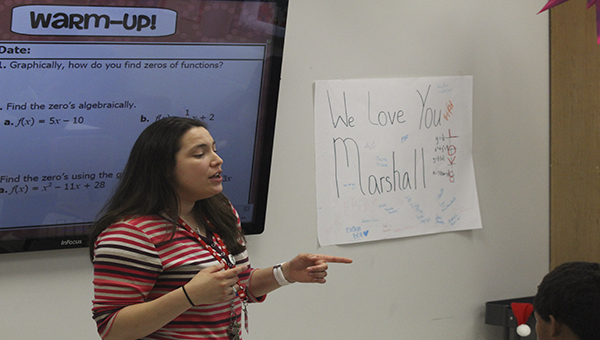 UP FOR THE HONOR: River City Early College High School math teacher, Karin Marshall goes over class work with students on Thursday. Marshall is one of the teachers nominated for Vicksburg-Warren County Chamber of Commerce Teacher of the Year honors.(Courtland Wells/Vicksburg Post)

River City’s Marshall: ‘I teach because it is my calling’

With a passion for young people and all things math and science, Karin Marshall teaches because it is her calling.

The River City Early College High School math teacher was nominated to represent the new school for the Vicksburg Warren County Chamber of Commerce Teacher of the Year honors.

During Marshall’s first job at a school in Texas, she taught a course called geometry in construction, and it changed Marshall’s outlook on the classroom. It was her first experience with project-based learning, and it is how she approaches her lessons now.

That class in particular had students construct a house while learning geometry. The students put what they learned in the classroom to use while constructing the house.

“Everyone involved learned a lot about math, construction, finance, budgeting, safety and working as a team,” she said. “One of the biggest impacts of this project was changing my female student’s attitudes towards construction.”

Making the subject matter relevant like she did in this class is necessary because students often ask her how their lessons will be used in the real world. Other ways she answers that question is to invite guest speakers like professors, computer scientists, mechanical engineers and more to her room, and also by taking her students on field trips to see math in workplaces like the U.S. Army Corps of Engineers Engineer Research and Development Center.

When it comes to testing, Marshall has a different approach than multiple choice. She said it is rare for students to know nothing about the subject matter, but typically they make small mistakes along the way, leading them to the wrong answer. By giving her students partial credit for their demonstrated work, she is able to pinpoint where it went wrong and teach them how to correct the mistake.

“When I give tests I try to give as much feedback as possible on work that is shown,” she said. “They more often reach an incorrect answer simply because of a small oversight during working out problems. Helping students see that mistake can help them not make it again in the future.”

Marshall also takes time to tutor students before and after school whenever they ask for help. It is important to her to keep her door open to any student who needs help.

Marshall loves having a part in her student’s lives and being there for them when they need guidance. She said high school can be a vulnerable and impressionable age as students try to discover who they will be as an adult, and she wants to be there for her students as they try to figure it all out.

Marshall has a bachelor’s and a master’s degree in mathematics from the University of Houston. She is also certified to teach ESL, or English as a second language, meaning she can teach English to student who speak other languages.

“I teach because it is my calling,” Marshall said.

She student taught at Bryan High in Bryan, Texas. Then she got a job at Navasota High in Navasota, Texas for four years before moving to Warren Central High for one year. At these schools she taught algebra I, algebra II, geometry, geometry in construction and advanced placement calculus.

This is the first year River City Early College has been in existence, and she teaches algebra I, foundation of algebra and geometry at the new school.

Marshall’s husband is an engineer who works at he U.S. Army Corps of Engineers Coastal and Hydraulics Laboratory. The couple has three children.

Today’s story is the 17th in a series of articles on each teacher up for the honor of the Vicksburg Warren County Chamber of Commerce’s Teacher of the Year.

Two fires occurring within less than two hours of each other, on opposite sides of the county, destroyed a work... read more