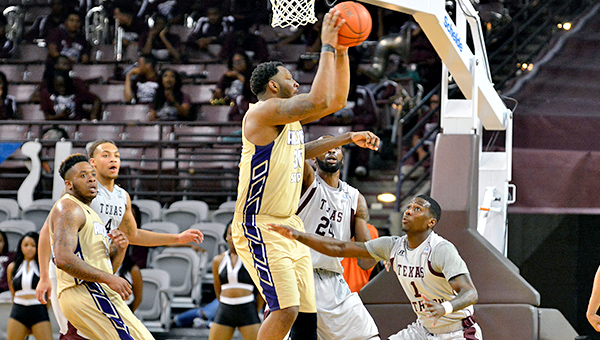 Zach Lofton scored 20 of his 30 points after halftime, Kevin Scott had a double-double and Texas Southern beat Alcorn 94-88 in overtime to clinch its third consecutive SWAC regular-season title.

“Our guys fought, but this was a tough one. Our guys gave it 100 percent; they gave it all they had. Some things didn’t go our way, some plays here and there. Just a really tough one,” Alcorn coach Montez Robinson said.

The Braves had their 11-game winning streak snapped, but they’ll still finish with back-to-back winning records in the conference for the first time since the 2001-02 and 2002-03 seasons.

Alcorn will wrap up the regular season Saturday at 5 p.m. at Prairie View A&M. The Braves, who are locked into the No. 2 seed, will then host a first-round game in the SWAC tournament Tuesday at 6 p.m.

Although Alcorn will compete in the SWAC tournament, it is ineligible for the NCAA Tournament because of NCAA sanctions related to its low Academic Progress Rating.

Texas Southern led 80-76 after a jumper by Lofton with 1:21 left in regulation Thursday.

The Braves used a jumper by junior A.J. Mosby to make it a two-point game and then got a stop defensively. Alcorn tied it after Davis tipped in a rebound with 17 seconds left. The Tigers had a chance on the last possession, but a contested mid-range shot was off the mark.

Lofton and Alcorn State’s Johnson traded layups before back-to-back buckets by Lofton made it 86-82 with 3:34 left in overtime. Denzel Dulin’s offensive rebound and putback pulled the Braves within two, but Lofton hit two foul shots and Stephan Bennett and Demontrae Jefferson each made one of two free throws to make it 90-84 with 41 seconds left. After a jumper by Vance on the other end, Scott and McCloud made two free throws apiece and the Tigers led by eight with 12 seconds left.

Texas Southern, which made 10 of 17 free throws in regulation, hit 8 of 12 in overtime.

“DeAndre Davis played out of his mind. He carried us, especially in the last four minutes of regulation,” Robinson said. “But there’s a lot of hurt bodies in the locker room right now. We were on the cusp of achieving a goal that we set at the beginning of the year and we just let it slip out of our hands. We obviously played a good team tonight.”

The win keeps Jackson State (13-17, 9-8) in a three-way tie with Grambling State and Prairie View A&M for fourth place in the Southwestern Athletic Conference standings with only a game Saturday against Alabama State remaining.

Those schools that earn top-four seeds host games in the opening round of the conference tournament.
Derek Roscoe finished with 13 points and Janarius Middleton added 10 points and 10 rebounds for the Tigers, who held a 38-31 advantage on the glass including a 16-10 lead in offensive boards.

Jackson State closed the first half on a 15-3 run to take a 39-25 lead. A layup by Roscoe followed by a Collins 3 to open the second half extended the Tigers’ lead to 19.