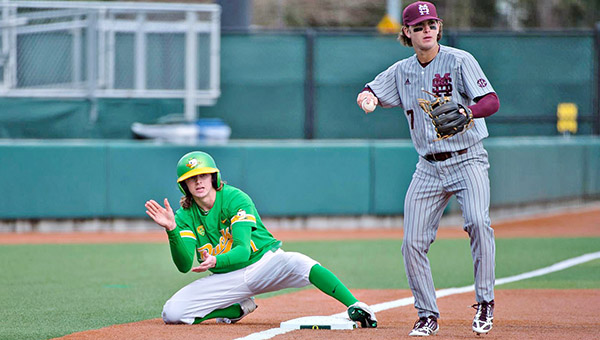 Oregon’s Matthew Dyer claps after reaching third base on a wild pitch as Mississippi State’s Luke Alexander throws the ball back to the pitcher in the second inning Saturday. Mississippi State beat Oregon 5-4. (University of Oregon Athletics)

EUGENE, Ore. — Mississippi State kept striking out Saturday against Oregon, but it also struck back.

Harrison Bragg went 3-for-3 and scored two runs, while Josh Lovelady was 2-for-4 with two RBIs and a run scored to lead Mississippi State to a come-from-behind 5-4 victory over Oregon in the middle game of a three-game series.

The Bulldogs struck out nine times — after whiffing 18 times in a 1-0 loss in the opener on Friday night — but managed to overcome an early 3-1 deficit to win.

Lovelady delivered a two-run single in the sixth inning to tie the game at 3, and then Cole Gordon put the Bulldogs (7-4) ahead for good with an RBI single in the eighth. Ryan Gridley brought in a needed insurance run later in the eighth inning with a bases-loaded walk.

“This was a gigantic team victory today,” Mississippi State coach Andy Cannizaro said. “We had so many guys that played instrumental roles in this big win. I am so proud of our guys. The conditions were not great, but they just kept battling. We picked up tremendous clutch base hits by Josh Lovelady and Harrison Bragg.”

Tanner Gardner doubled and drove in four runs, Josh Jung was 2-for-3 with two runs scored, and No. 10 Texas Tech (10-2) beat No. 8 Ole Miss (7-3) in a matchup of to-10 teams at the Shriners Hospitals for Children College Classic at Minute Maid Park in Houston.

The Rebels will play TCU Sunday at 1:35 p.m. in their final game at the Shriners Classic.

Louisiana-Lafayette (6-3) rallied from an early three-run deficit to defeat Southern Miss (7-3) for the second straight day.

Tracy Hadley homered in the first inning as Southern Miss jumped out to a 3-0 lead. Louisiana-Lafayette, however, scored one run in the bottom of the first and two in the third to tie it.

Todd Lott gave the Cajuns the lead for good in the fifth by doubling in a run with a double off of Golden Eagle starter Kirk McCarty. Lott scored one batter later on single by Steven Sensley to make it 5-3.

Lott finished the game 2-for-4 with two RBIs and a run scored. Ishamel Edwards had two hits and scored three runs.