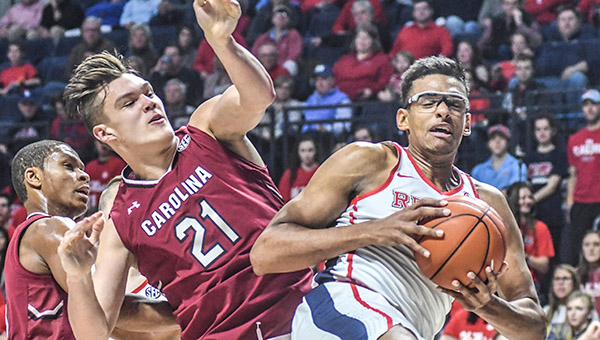 OXFORD (AP) — If Andy Kennedy had his way, Frank Martin wouldn’t be on the NCAA Tournament selection committee.

No, if Kennedy had his druthers, Martin would be the emperor and the only vote that matters on Selection Sunday.

Kennedy’s Ole Miss team defeated Martin’s South Carolina club, 75-70, Saturday night at The Pavilion at Ole Miss, and afterward, Martin was on the campaign stump for the Rebels.

“I have no idea why no one is even mentioning Ole Miss as a team that has a chance to make the NCAA Tournament,” Martin said. “I have no idea. If they played in any other league in the country, right now they’d be one of those teams spoken about being an NCAA Tournament team. They’re good. Andy manages things unbelievable and his team is playing at a high level at the right time of the year.

“When I sit and watch some of these teams that are supposedly on the bubble right now and they’ve got one top-100 win, how’s Ole Miss not in that conversation? How can those teams be there and Ole Miss is not being spoken about as an NCAA Tournament-caliber team. It’s disappointing and it aggravates me for two reasons — Andy Kennedy is a dear friend and I know how hard those kids work for him. It makes no sense. It’s frustrating.”

Ole Miss improved to 19-12 overall and 10-8 in the Southeastern Conference with Saturday’s win. The Rebels are now 5-12 against top-100 RPI teams.

“I love Frank, man,” Kennedy said. “Frank’s my brother. You help your brothers. The reality is our numbers don’t depict that we are an NCAA Tournament team. But guess what? Our numbers aren’t complete. We still have an opportunity to improve upon those and my hope is that’s what we do when we get to Nashville (for next week’s SEC tournament).”

Saturday’s game marked the final home contest for Ole Miss senior Sebastian Saiz, and the 6-foot-9 forward made it a memorable night by scoring 21 points and grabbing 15 rebounds.

“It was my favorite game at Ole Miss,” Saiz said. “I’m not going to lie. I just loved it. It was emotional.”

Ole Miss led by as many as 20 points early in the second half before South Carolina came charging back. The Gamecocks got within four points before Cullen Neal knocked down a 3-pointer to give the Rebels some breathing room.

South Carolina closed to within four points twice more in the final minutes as Ole Miss missed four of its final six free throws, but the Gamecocks couldn’t close the gap further.