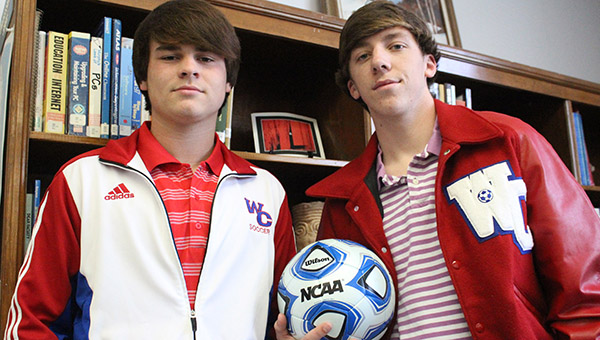 Hunt Holdiness and Dillon Green have been inseparable friends since they were 8 years old. Just because high school graduation is looming hardly meant it’s time to go their separate ways.

Holdiness and Green, both senior soccer players at Warren Central, recently earned spots on East Central Community College’s roster for next season at the school’s tryout camp. They were among four players picked from 49 who attended the camp.

“We talked to their coach and he wanted us to come to the camp. There were 49 people there and 12 made the first cut. Then four of those 12 made the team,” Green said. “When we tried out and got called out as making it, it felt great.”

Holdiness and Green will have walk-on status with the soccer team, and will not receive an athletic scholarship in the 2017-18 school year. Both of them, however, will receive academic scholarships that cover the full cost of tuition and expenses.

“It’s great. It’s kind of a dream. You want to play college sports from the time you’re little, and I’m getting to do it,” Green said.

Holdiness and Green have been friends since they played on the same youth baseball team when they were 8. They’re as close as brothers, to the point that they seemed to pick up each other’s thoughts and finish the other’s sentences during an interview.

Naturally, they plan to room together next year.

“We basically live together now,” Holdiness joked. “If there’s one of us, there’s the other.”

“It’s basically the same as now, just living on our own,” Green added in the next breath.

Green is a midfielder who had seven goals and five assists this season. Holdiness is also a midfielder and forward who scored 15 goals and assisted on seven more.

Holdiness scored 25 goals over the past two seasons, and emerged as a top player for the Vikings despite not making the varsity roster as a freshman and only playing sparingly as a sophomore.

“He’s a real success story,” Warren Central coach Greg Head said. “He shows what you can accomplish with hard work.”

Holdiness said a familiarity with East Central helped sell him on the school as a viable option. His grandfather lives in nearby Newton, and he’s been a regular attendee of the school’s summer athletic camps over the years.

“I’ve always been to the baseball camp at East Central, so I’ve always liked it. It’s just far enough to go home or stay if you want to,” Holdiness said.

Green said he liked the look of East Central’s campus.

“Everything on campus is pretty updated. Everything in the science department is brand new, and the soccer dorms are new,” Green said.

Having a friend along for the ride also helps. Although there will be the usual learning curve as Holdiness and Green transition from high school to junior college soccer, Head said their games, personalities and friendship should make it go a lot smoother.

“Hunt has been one of the leaders on the team the last two years, so he shouldn’t have any problem fitting in. And Dillon has been our comic relief, so he should fit right in,” Head said. “The fact they’re going together is a plus. It’s going to make that transition easy.”