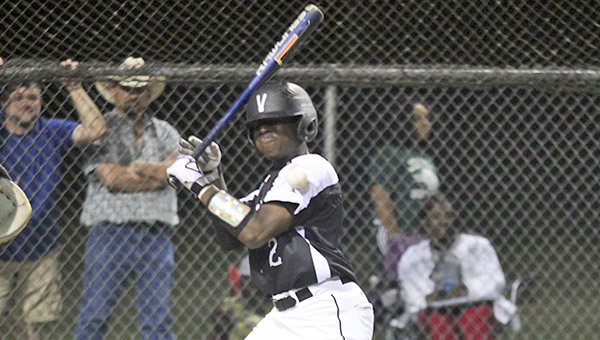 Vicksburg High’s Alfred Barnes is hit with a pitch while batting against Neshoba Central on Thursday. Neshoba beat the Gators 13-2. (Courtland Wells/Vicksburg Post)

After that, it got a little sideways.

Zack Smith doubled and drove in three runs, and Beck Williams went 2-for-2 with two RBIs and two runs scored as Neshoba Central beat the Gators 13-2 in their Division 4-5A baseball opener at Bazinsky Field.

Neshoba Central belted out 12 hits and scored in every inning except the third in the five-inning, run-rule victory.

“We faced a good hitting team. They put pressure on us from the get go,” Vicksburg coach Derrick DeWald said. “I just have to tip my hat off to them. My guys played hard, it just wasn’t our night.”

The Gators manufactured two runs without getting a hit in the bottom of the first inning to take a 2-1 lead. A hit batter and an error set up a run-scoring fielder’s choice by Chris Farrish. Tyrese Wolfe then swiped home as part of a double steal.

That was just about the last highlight for the Gators. Neshoba Central answered with five runs in the top of the second to take the lead for good, and then scored four more in the fourth inning and three in the fifth.

The Rockets had five hits, all singles, during their big second inning. Williams drove in one run, and Smith had a two-run single. Smith also had an RBI double in the fourth inning and scored on another double by Cody Singleton.

Singleton finished the game 3-for-4. Singleton also started on the mound and threw four innings. He allowed the two unearned runs in the first, two hits and one walk, and struck out five.

Cole Irvin had two RBIs, and Colby Ellingburg was 3-for-4 with two runs scored.

Gage Ederington and Alfred Barnes had Vicksburg’s only hits. Both were singles.

The Gators and Rockets were scheduled to play again Friday night in Philadelphia, but the game has been postponed because both of Neshoba Central’s basketball teams are playing in the Class 5A championship games tonight. The game has not yet been rescheduled.

Vicksburg’s next game will instead be Saturday at 10 a.m. against Murrah, at Bazinsky Field. VHS will also play Franklin County Saturday at 3 p.m.

Then, Tuesday at 10 a.m., the Gators will take on crosstown foe Porters Chapel Academy at Bazinsky Field. It’s the first time the teams have ever played each other in baseball, and is part of a three-day, eight-team spring break tournament that also includes St. Aloysius.