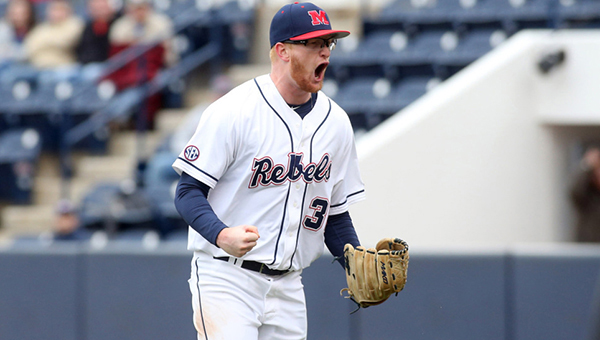 Brady Feigl allowed three hits and one walk in eight scoreless innings, and the Rebels shut out Furman for the second day in a row, 5-0 on Saturday.

Ole Miss won the opener 2-0 on Friday as David Parkinson took a no-hitter into the eighth inning. The finale of the three-game series is Sunday at 1:30 p.m.

In Saturday’s middle game, Feigl (2-1) powered the Rebels (10-5) with one of the best games of his college career. The sophomore retired 24 of the 28 batters he faced — including 10 in a row to start the game — and finished with 10 strikeouts to reach double digits for the first time in his career.

Will Stokes pitched a scoreless ninth to finish the shutout.

It was Ole Miss’ third shutout in the past four games. During the span, its starting pitchers have thrown 16 innings and allowed four hits, no runs and one walk while striking out 19 batters.

In his second career start at first base, redshirt sophomore Michael Fitzsimmons homered for the first time this season. His two-run shot in the second inning started the Ole Miss scoring.

While opportunities were few and far between, the Rebels took advantage of them with five runs on only three hits. Each of the first five hitters in the lineup scored a run. The Nos. 6-9 batters were a combined 0-for-11.
Furman pitcher Grant Schuermann (3-1) pitched eight innings. He allowed five runs, only three earned, on three hits. He walked two batters and struck out one.

Southern Miss pitching blanked the Musketeers over 18 innings, claiming 2-0 and 10-0 victories in a doubleheader sweep.

The teams played a pair of games Saturday to avoid expected inclement weather forecast for Saturday night and Sunday morning.

Xavier (7-9) scored a run in each of the first two innings Friday night. The Musketeers failed to score again.

“You give up those two runs (Friday) night and then go 25 scoreless innings, I thought that was a major, major contribution from all those guys, from starters to relievers,” Southern Miss coach Scott Berry said. “I was very pleased (Saturday) after coming off a disappointing loss.”

In the opener, the Golden Eagles (11-4) scratched across two runs in the fourth inning and junior right-hander Hayden Roberts did the rest.

Roberts (1-1), who had started on Friday nights in the Golden Eagles’ three previous series, came within an out of a complete game. He limited Xavier to two hits in a career-high 8 2/3 innings, with eight strikeouts and two walks.

In the ninth, he issued a one-out walk and then gave up a two-out single before Nick Sandlin came in to strike out the final batter and pick up his first save.

Daniel Keating and Taylor Braley hit solo shots in the first inning off starter Greg Jacknewitz (0-2) for a 2-0 lead, and Dylan Burdeaux’s fifth homer of the season, a two-run shot, sparked a three-run third inning.
Maack led off the fourth inning with his first homer of the year, and then added a two-run blast in his next at-bat in the sixth inning.

Bryant Bowen added a two-run double in the seventh inning to polish off the Musketeers.