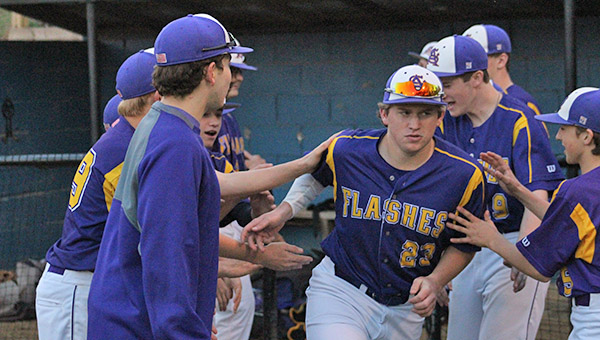 St. Aloysius outfielder Justin Ehrgott runs through a gauntlet of his teammates and onto the field during introductions at a game earlier this season. St. Al, Vicksburg High and Porters Chapel Academy will host a three-day spring break tournament beginning Monday at Bazinsky Field. (Ernest Bowker/The Vicksburg Post)

While a lot of their classmates sleep in or head to spring break destinations like Destin and Gulf Shores this week, most of Warren County’s baseball players are waking up early and staying home — and they’re happy to do it.

Vicksburg High, St. Aloysius and Porters Chapel Academy will all participate in a hometown spring break tournament this week at Bazinsky Field. Porters Chapel hosts Tri-County Academy in the opener Monday at 10 a.m., and 10 other games spread across three days will follow.

Four games will be played Monday and Tuesday, and three on Wednesday.

“The teams that we’ve got coming in, I don’t think anybody is going to be overpowering for anybody. We really tried to bring teams in to where we could have a lot of competitive games,” Vicksburg coach Derrick DeWald said. “I’m looking forward to it. It’s going to be three long days for us coaches, but at the end of the day if we can make a few thousand dollars at the concession stand and win a few ballgames that’s what you want to do.”

This is the first time any of the Warren County teams have hosted a spring break tournament since Porters Chapel did it in the late 2000s, but all three coaches are hoping it’s the start of a new spring break tradition.

“We haven’t really talked more than this year, but if it’s a success I would think it would be something that we all three would be interested in for sure,” PCA coach Wade Patrick said. “We’re in a good area where we can attract some of the Jackson teams and those that are fairly close by. We’re looking forward to it.”

DeWald said that, as the only games in town, a good showing this week will help spread the word and grow the event for next year. Although this year’s tournament will be played entirely at Bazinsky Field, it could easily double in size next year with Porters Chapel and its field on board.

The idea of hosting a spring break tournament — the catch-all name for any multiple-game event in high school sports, even though there’s not a trophy or bracket involved — started with DeWald.

In his first two seasons at Vicksburg, DeWald took his Gators to Ridgeland and then Lawrence County on the first three days of spring break. Ridgeland High School discontinued its tournament after the 2015 season. There are few, if any, quality events in Central Mississippi, and the thought of riding the bus for several hours to another far-flung destination wasn’t appealing.

So the VHS coach talked to his counterparts at PCA and St. Al, kicked around a few ideas, and a collaborative effort was born.

The appeal of staying at home was immediately obvious, the coaches said. Six of the eight teams involved will play three games apiece, and Tri-County will play two. Getting a good amount of games under their belt without having to leave town, and all while saving travel costs, felt like a win for everyone involved.

“Not having to get on the bus and go to the Coast to play some good competition is going to be really good,” Naron said. “Not only that, it’s good for our city having some teams coming in and staying in the hotels and spending their money in our town and being able to see Vicksburg.”

While three of Warren County’s teams are staying home for the first half of spring break, the fourth will spend the second half of the week on the road. Warren Central is headed to the Coast for its spring break tournament, with four games in Gulfport and Biloxi Thursday, Friday and Saturday.

The Vikings will play Buckhorn (Ala.) Thursday afternoon at Biloxi High School, and then face Lafayette and Gulfport in a doubleheader at Gulfport on Friday. For the finale, they’ll play Biloxi at MGM Park — the home of the Milwaukee Brewers’ Double-A affiliate the Biloxi Shuckers — Saturday at 10 a.m.

Warren Central coach Conner Douglas said going out of town was a way to combine baseball and spring break in one neat package.

“We’re going to hit the road. It’ll be something fun for the boys to get out of town and enjoy a little bit of time, plus play a little bit of competition,” Douglas said. “It sucks taking away their spring break always, but we’ve got to do it. This way we can kind of give them a vacation and also play some baseball and get better.”