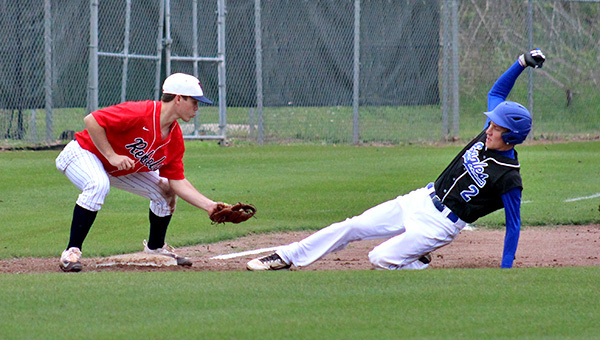 Upon the conclusion of the first inning Monday against Tri-County — an inning that featured both teams batting around and scoring a total of nine runs, and which took 40 minutes to muddle through — Porters Chapel Academy coach Wade Patrick offered a grim but blunt assessment.

“They can’t make a play and we can’t throw a strike,” he said, more as an observation and less to anyone in particular.

PCA’s pitchers walked eight batters and hit five more, its fielders committed five errors behind them, and Tri-County crushed the Eagles 20-5 in the opening game of the Vicksburg Spring Break Tournament at Bazinsky Field.

PCA did bounce back to beat Cleveland East Side 15-7 in its second game of the day.
Tri-County finished with 13 hits and scored multiple runs in four of the game’s five innings. Tyler White and Trayce White both went 3-for-4 with four RBIs. It was the walks and hit batters, particularly early in the game, that allowed it to gain the upper hand, however.

“We got behind the 8-ball in the first inning because we hit a batter and walked four, or whatever it was. That’s four or five runners right there that don’t even earn their way on, and then on top of that you make five errors in the game and hit six,” Patrick said. “That’s a recipe for losing, no matter who you’re playing. Let alone a good team, you play a terrible team and they’re going to beat you with stats like that.”

The 40-minute first inning was full of runs and mistakes by both teams.

Tri-County took advantage of three walks and two errors to score four runs in the top half. PCA scored five times in the bottom half, using a series of hit-and-runs, two errors, and a couple of infield hits to take the lead.

The Eagles went cold after that, though. They only had two hits the rest of the game. Bailey McMillian singled in the fourth and was erased on an inning-ending double play. Garrett Hutchins doubled with two outs in the fifth and was caught stealing third to end the game.

“We put some guys in motion in the first inning and made them make some plays, and we got them out of position. After that, we didn’t get anybody on to really do anything,” Patrick said. “We hit the ball. We just didn’t hit the ball with a lot of authority. A lot of that is just baseball. He did a good job of throwing strikes. That’s what you do when you fill the strike zone up. You get some balls that are right at them, some that they just make plays, and that’s part of it.”

Tri-County regained the lead by scoring three runs in the second inning, with two errors and a hit batter moving the rally along.

Trayce White had a bases-clearing double to key a four-run fourth inning, and then the Rebels put a capper on the blowout with nine runs in the fifth. Fourteen batters came to the plate in the fifth inning.

“We went through a stretch there from the second to the fifth where we did pretty good,” Patrick said. “It was just, overall, it wasn’t good. Plain and simple. It was not good at all.”

Brayden Ray doubled, singled and scored three runs to lead Porters Chapel past Cleveland East Side in its second game of the day at the Vicksburg Spring Break Tournament.

PCA will play its final game of the tournament Tuesday at 10 a.m. against Vicksburg High. It’s the first time the two Warren County teams have ever played each other in baseball.

Garrett Breithaupt went 2-for-3 with a double and three RBIs, and his brother Tyler doubled, singled and drove in two runs as St. Aloysius beat Cleveland East Side Monday in the Vicksburg Spring Break Tournament.

The Breithaupt brothers also teamed up on the mound to lead St. Al. Tyler earned the win, while Garrett got a save.

Thomas Trichell was 2-for-2 with a double, while Kieran Theriot and Landon Middleton each had RBI singles for the Flashes.