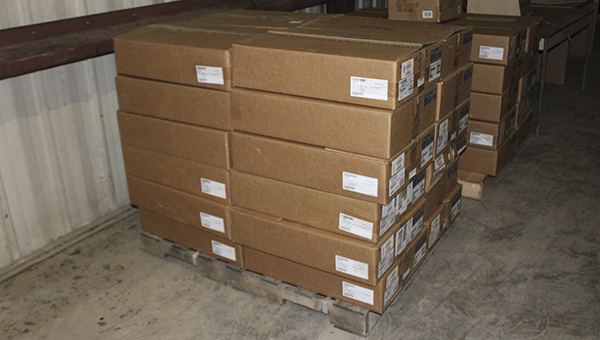 NO LONGER IN USE: A total of 44 cardboard boxes containing radios sit on pallets in the county’s warehouse at the Vicksburg-Warren 911 Communications Center. The county is looking for more space to store old radios as the county switches to the MSWIN statewide communications network.

“All the radios for the road department have been removed and the new ones installed for the MSWIN system on all of the vehicles that are on the lot,” Jones said. “That was done two weeks ago. What we had to do was, the radios taken from vehicles and the equipment have been stored temporarily at 911 in that shed temporarily. The question is what are we going to do with those old radios?”

Jones said the older radios will be kept until the MSWIN system in the county is fully operational and all the problems with the startup have been resolved.

He said the county’s present hand-held radios could be used in an emergency, using the county’s north radio tower.

Once MSWIN goes into full operation, the radios will be obsolete, and no other city or county in the state will be using an 800 megahertz system, eliminating the possibility of donating or selling the units another government in the state.

Jones said the radios are presently being stored in the county’s metal building at the Vicksburg-
Warren E911 Communications Center on Clay Street, “With the objective of waiting until everything has played out and we understand the system is actively operating correctly before we dispose of those radios.”

But Jones said the county has yet to replace the sheriff’s office radios, “And we’ve got beaucoup radios with them, that we’ve got to take out from mobile to hand-held radios. We’ve got to look at storage for them, also, because we don’t want them scattered everywhere.” And space at the building by 911 is getting short.

Warren County Board of Supervisors president Richard George suggested the county move a county-owned storage building in Claiborne County to county barn, which is across UPS on U.S. 61 North. He said the county leased space on a radio tower in Claiborne County, and acquired the building to hold equipment necessary to use the tower. The tower is now obsolete with MSWIN, he said.

The building, Jones said, is large enough to hold all the radios.

George said the board needs to look at options to move the building.

“We need to go to the guy we bought it from about moving it, because we don’t have any business trying to haul that building,” he said. “There are too many things that can go wrong. (We need) somebody who has experience moving that type of building, because it’s big.”

A Vicksburg man remains in the Warren County Jail in lieu of $250,000 bond charged with two counts of attempted... read more