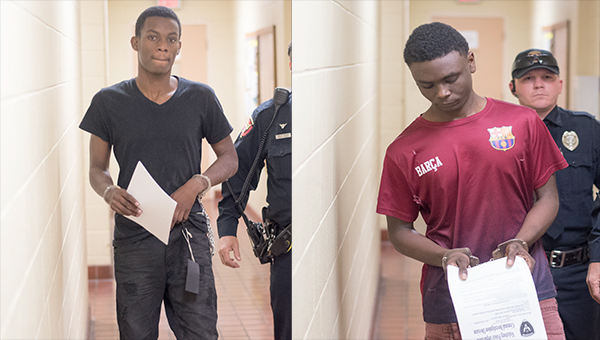 Two men remained in the Warren Jail Wednesday in lieu of $120,000 bond each, and charged with nine counts each of burglary.

Police arrested Sheddrick Thomas, 20, of Orlando, Fla., and Trevon Law, 18, of Vicksburg, March 9 after a chase that resulted in a wreck at the intersection of Halls Ferry Road and Pemberton Square Boulevard.

They are believed to be responsible for 22 other burglaries in the city, and are also charged with possession of a stolen auto and felony eluding.

The Toyota Tundra pickup in which they were riding was reported stolen from Florida.

According to police reports, the burglaries the pair are accused of occurred between March 6 and 8, and were scattered throughout the city, with the pair hitting areas along South Frontage Road, Wisconsin Avenue and side streets, streets in the southeast part of town, the Old Vicksburg area and Marcus Bottom.

Vicksburg police Capt. Sandra Williams said patrol officers were given photographs of a white Toyota Tundra pickup seen on video from one of the areas where some of the burglaries occurred. Police Chief Walter Armstrong on March 9 said a patrol officer saw a truck matching the description of the truck in the video in the area around Drummond Street.

When the officer put on his blue lights to stop the truck, the driver sped off, starting the chase.

“The first officer lost sight of the truck but another officer hearing the radio traffic was able to locate them and continued pursuit until the truck ran the red light at the intersection of Halls Ferry and Pemberton (Boulevard) and collided with another car,” Armstrong said.