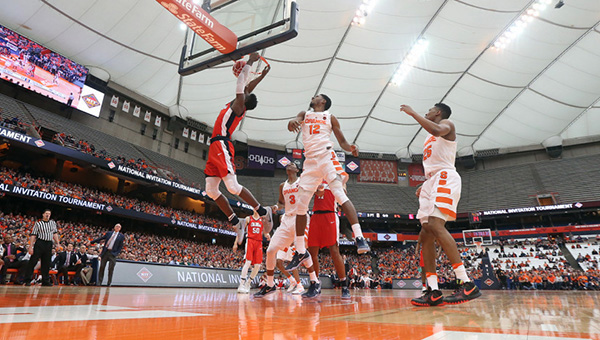 Ole Miss’ Terence Davis dunks for two of his 30 points in Saturday’s NIT game against Syracuse. Ole Miss won, 85-80, to advance to the quarterfinals. It will host either Georgia Tech or Belmont on Tuesday night. (Joshua McCoy/Ole Miss Athletics)

SYRACUSE, N.Y. (AP) — Terence Davis made 6 of 7 3-pointers and finished with 30 points to lead fifth-seeded Ole Miss to an 85-80 upset of top-seeded Syracuse in the second round of the NIT on Saturday.

Ole Miss (22-13) advanced to a quarterfinal game at home Tuesday against the winner of Sunday’s game between Georgia Tech and Belmont.

Deandre Burnett, who added 19 points and nine assists, hit the go-ahead 3-pointer with 3:26 left after Andrew White III made a 3 to tie it 74-all.

“They are a good team. They shot the ball well and we did not attempt to guard them at the 3-point line, even with the shot clock going down to the end, like at the end of the first half, and then we tied the game twice with 3s, and the shot clock is almost down and we let them shoot again from the three,” Syracuse coach Jim Boeheim said. “It’s just a microcosm of our season. Obviously, it’s very disappointing when you can’t guard at the 3-point line. We had that problem all year.”

Burnett was 5-for-9 on 3s, and the Rebels were 15-of-33 from beyond the arc against Syracuse’s zone defense.
Cullen Neal had 15 points for the Rebels and Sebastian Saiz had 10 points to go with 12 rebounds for his 22nd double-double of the season.

Davis also had seven rebounds to go with his 30 points.