Rebuilding year turned into a memorable one for WC’s Head 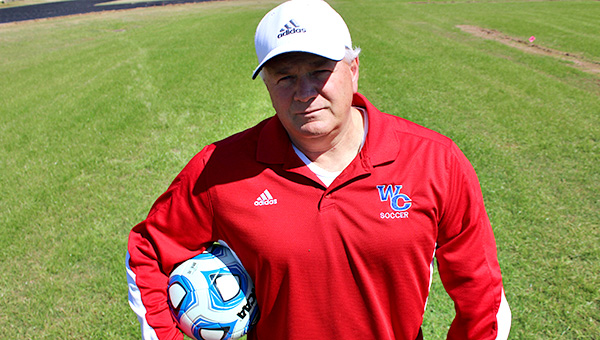 Warren Central’s Greg Head is the 2017 Vicksburg Post soccer Coach of the Year. It’s the fourth time in six seasons that he has won the award. (Ernest Bowker/The Vicksburg Post)

This was supposed to be a rebuilding year for Warren Central’s boys soccer team. Even the guy tasked with overseeing the job thought so.

A weird thing happened on the way to mediocrity, however.

The Vikings turned out to be pretty good.

They started the season with a five-game winning streak that was snapped when they took eventual Class 6A champion Northwest Rankin to the limit in a 1-0 loss. They beat perennial powers Pearl, Germantown, Brandon and Florence. They finished with a 13-4 record, just one win short of the previous season’s total.

They earned respect and took a few steps toward joining Mississippi’s soccer elite. For his efforts in guiding them there, Head has earned The Vicksburg Post’s soccer Coach of the Year award. It’s the fourth time in six years that Head has won it. He also won it in 2012, 2013 and 2014.

“It’s always an honor to be recognized for what you do,” Head said. “If I didn’t have players that play with as much heart as they do, I wouldn’t be as successful as I’ve been.”

Head has been quite successful. He has a 138-90-5 record in nine years as Warren Central’s coach, and hasn’t had a losing season since the 2008-09 squad finished 7-9-1. Given the number of lost starters between last season and this one, he figured that streak might end.

These Vikings, though, refused to fall in line with their modest expectations.

“They worked hard in the preseason. They worked harder than they’d ever worked before,” Head said. “They were used to winning and don’t want to go back to being .500 every year.”

The Vikings opened the season with a 1-0 win over Pearl in their classic game and then won four more in a row before the real turning point of the season came.

In the 1-0 loss on the road at Northwest Rankin on Dec. 1, the Vikings went toe-to-toe with a team that was ranked in the top five nationally by MaxPreps.com. Northwest Rankin scored just before halftime to get the lead and generally controlled the pace of the game, but the Vikings never backed down and had several late scoring chances.

It was then, Head said, that he knew this could be more than a rebuilding year. It was a notion confirmed with a 2-1 win over Brandon in early January. That was the first time WC had beaten or even scored on the Bulldogs in four meetings, and was one of only three losses Brandon had this season. The other two were to state runner-up Ocean Springs.

“We played Northwest Rankin and stuck with them. When we beat Brandon, I told the guys we’re right there. We’re at the top with them, and we’ve got a shot,” Head said.

The win over Brandon was followed with a 2-0 loss to longtime Division 4-6A nemesis Clinton, which in turn led to a playoff rematch with Northwest Rankin and a first-round exit. Northwest Rankin finished 23-1 and won three of its four playoff games by at least two goals. It beat Warren Central 3-0.

The ending was disappointing, but the journey was exhilarating.

The Vikings won 12 or more games for the seventh time in eight seasons. The rebuilt defense, led by senior Jacob Cochran and sophomore keeper Chase Graham, posted eight shutouts and allowed a total of 11 goals — less than one per game.

Now another rebuilding job begins. Only four seniors are graduating this time, but the list includes Cochran, fellow defender Jack Richardson, and midfielders Hunt Holdiness and Dillon Green. Holdiness was second on the team with 15 goals.

Among the returners are Vicksburg Post Player of the Year Braylen Greer, only a junior this season, and six sophomores who saw significant playing time.

“We did this with a young team,” Head said, with a mix of pride and astonishment.

Vicksburg’s Banks made a statement in her senior season