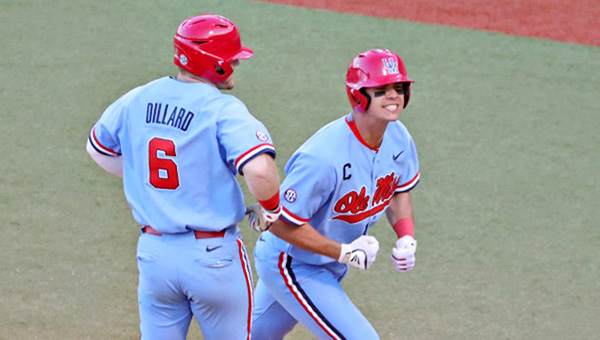 OXFORD — The laws of physics weren’t working for Ole Miss Sunday, but the law of averages turned its way.
Hard-hit balls that didn’t drop in green space or didn’t have enough oomph to get out finally did, as the 16th-ranked Rebels rallied with a three-run eighth and defeated Vanderbilt 10-8 before a crowd of 8,221 at Swayze Field.

Ole Miss scored six runs in the first 23 innings of the weekend but scored eight in their last four at-bats to clinch the opening series.

The Rebels (14-6, 2-1 Southeastern Conference) trailed 8-7 when they got a solo home run from Colby Bortles and RBI hits from Chase Cockrell and Nick Fortes in the eighth.

Tim Rowe also hit a solo home run leading off the seventh. The Rebels trailed 5-2 after four innings and 6-3 before scoring threee times in the sixth.

“We had to score eventually. We were waiting for that big hit, that big double in the gap to clear the bases. We just kept at it, kept putting things together, having good quality AB’s, and it worked for us,” Bortles said.

The first three Ole Miss pitchers were freshmen, including starter Will Ethridge, who allowed five earned runs in 3 1/3 innings in his first weekend start. He had allowed only two earned runs in 15 2/3 innings previously.

Cockrell, a junior college transfer from Hinds, hit well early in the season but had just one hit in his 14 most recent at-bats when he went to the plate. He was looking fastball all the way.

“(Murfee) wasn’t confident in his slider. I just looked fastball and was willing to adjust,” Cockrell said.
The Rebels finished with 10 hits, two each by Bortles, Golsan and Rowe, a new addition to the lineup at designated hitter. Bortles drove in two runs and scored twice.

“It was nice to win, but to win this way, where we didn’t pitch well and we needed (our) offense to stay in the game like that,” Bianco said. “Outs were hard to come by for both teams.”