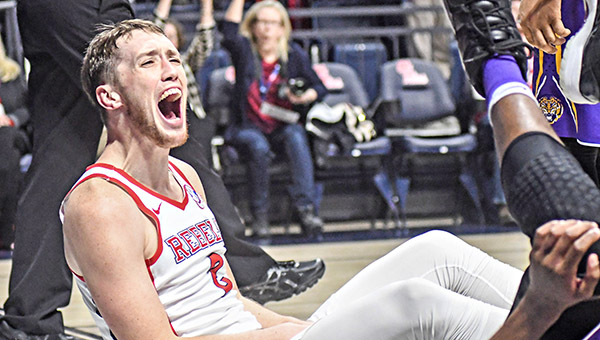 Ole Miss guard Cullen Neal (2) reacts after scoring while being fouled against LSU earlier this season. Ole Miss will host Georgia Tech in the quarterfinals of the NIT Tuesday at 8 p.m. (Bruce Newman/The Oxford Eagle)

The NCAA Tournament’s Final Four remains the ultimate destination for college basketball teams, but with one more win Ole Miss will be within reach of the sport’s consolation prize.

The Rebels return home Tuesday night to face Georgia Tech (19-15) in the quarterfinals of the National Invitation Tournament. The winner moves on to the NIT’s Final Four next week in New York.

It’s the first time Ole Miss (22-13) has been in the NIT quarterfinals since 2010, and it is seeking its third trip to Madison Square Garden for the Final Four in 11 seasons under head coach Andy Kennedy.

“That’s the mecca of basketball in the world,” Ole Miss forward Sebastian Saiz told The Oxford Eagle. “Everybody wants to play there as a basketball guy. Doesn’t matter if it’s high school, college, professional basketball — somewhere else or in the NBA — you all want to play in the Madison (Square Garden).
“Once you get those two big wins, it’s just so close that you start thinking about it.”

So far, Ole Miss has made the most of its postseason. It went on the road to win its first two NIT games last week, 91-83 at Monmouth and 85-80 at top-seeded Syracuse.

The two wins allowed the fifth-seeded Rebels to host the quarterfinal game against No. 7 Georgia Tech — the higher seed hosts in the first three rounds of the NIT — and also marked a milestone in the program’s history.
The win at Syracuse put Ole Miss’ all-time record at 1,281-1,281. It’s the first time since Jan. 17, 1958 that the program has an overall record of .500 or better.

The Rebels are hoping for a festive atmosphere for their final home game this season. Kennedy bought 1,000 tickets that will be given away free to students on a first-come, first-serve basis.

“I’ve never had a postseason game here,” Saiz said. “From what I’ve heard, there’s a lot of people coming. It’s going to be a lot of fun.”

Like Ole Miss, which is making its 12th NIT appearance, Georgia Tech is no stranger to the NIT. This is the ninth appearance for the Yellow Jackets and they’ve reached the quarterfinals in four of their last five trips to the tournament.

They haven’t been past that round, however. They lost to San Diego State in the quarterfinals last season.
Also like Ole Miss, Georgia Tech won two road games to reach this point. Georgia Tech was just 2-11 on the road in the regular season, but took down Indiana in the first round of the NIT and Belmont in the second.

Now it’ll try to win a third consecutive road game and earn yet another trip — this one all the way to New York.

“We haven’t been as good on the road as we have been at home. So for us to take the next step in the growth of our team, we have to win another true road game,” Georgia Tech coach Josh Pastner said. “Based on how we’re playing right now, is that going to bode well for what we’re doing to see if we can do good on the road against a good Ole Miss team?”