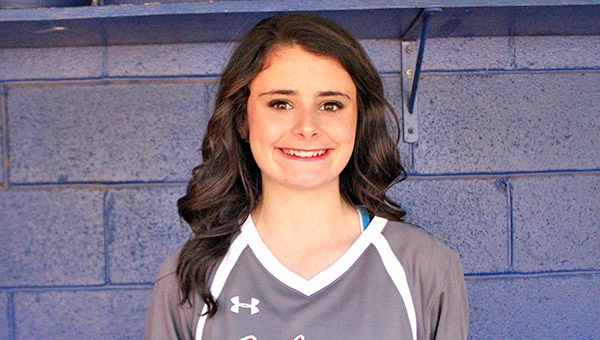 Warren Central softball player Brooke Comans went 2-for-3 with an RBI and two runs scored in a 20-1 win over Murrah on Tuesday.

Warren Central only had six hits Tuesday against Murrah. It really didn’t need any more than that.

The Lady Vikes drew 20 walks against Murrah’s pitchers, scored 12 runs in the bottom of the first inning, and cruised to a 20-1 victory in a Division 4-6A game at Lucy Young Field.

Cocoa Fultz led the walk parade by drawing four free passes and scoring three runs in a game that only lasted 2 ½ innings. Fifteen players had a plate appearance for Warren Central (6-6, 1-0 Division 4-6A), and 13 of them walked at least once.

“For the most part I was satisfied. I just hate playing games like that. It doesn’t really help you prepare for anything,” Warren Central coach Dana McGivney said.

Among the hits the Lady Vikes did have was a two-run, inside-the-park home run by April Lynn in the first inning. That gave them the lead after Murrah had scored its lone run in the top of the first.

After Lynn’s home run, 10 of the next 13 batters walked as the lead swelled to 12-1. Six consecutive walks in the second inning helped push the lead to 20-1 by the end of the frame, and the game was ended via the mercy rule after Madison Wade struck out the side in the top of the third.

Wade recorded eight of the nine outs in the game via a strikeout. She walked one batter and gave up three hits, all in the first inning.

Brooke Comans, who entered the game as a pinch-hitter, finished 2-for-3 with an RBI and two runs scored. She and Megan Stewart, who was 1-for-2 with an RBI single, were the only Lady Vikes who didn’t draw a walk.

Playing less than 24 hours after it scored 29 runs in a four-hour win over Terry, the Vicksburg Missy Gators came up one run short against Natchez.

Deja Hudson went 2-for-3 with two RBIs, and Natchez rode a fast start to a win over Vicksburg (2-5). Natchez scored three runs in the second inning and another in the third to take a 4-2 lead, and then held off a late rally by the Missy Gators.

Sarah Daniels singled in two runs for Vicksburg in the sixth inning to cut a three-run deficit to 5-4. She stole third, but was thrown out trying to score on a ground ball to end the inning.

Abby Hasty reached on a one-out single in the seventh to give the Missy Gators another scoring threat, but was stranded at second base.

The Missy Gators finished with only four hits and left eight runners on base.

“We hit a lot, but solid and not out of the infield. When we hit line drives, it was right at them,” Vicksburg coach Brian Ellis said.

PEARL — Southern Miss has not fared well against Mississippi State in recent years, having lost five of the last... read more