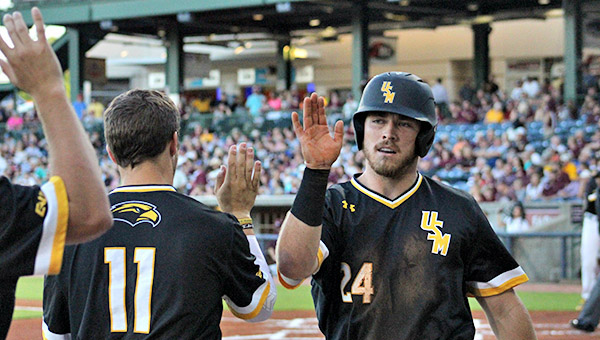 Southern Miss’ Dylan Burdeaux (24) gets a high-five from teammate Mason Irby (11) after scoring a run in the first inning of Tuesday’s game against Mississippi State. Southern Miss went on to win, 7-5. (Ernest Bowker/The Vicksburg Post)

PEARL — Southern Miss has not fared well against Mississippi State in recent years, having lost five of the last six games in the series heading into Tuesday’s matchup at Trustmark Park.

For one year, at least, that trend reversed course.

The Golden Eagles jumped on Mississippi State for four runs in the first inning, increased its lead to six by scoring three more times in the third, and then hung on to beat the Bulldogs 7-5 Tuesday night.

Cole Donaldson and Dylan Burdeaux each drove in two runs for Southern Miss (17-4), which has now won two of the past three games against its in-state rival despite being upside down in the overall ledger since the series moved to Pearl in 2009. Mississippi State has won four of the nine times they’ve played at Trustmark Park.

Southern Miss and Mississippi State (12-10) will play three-game series on campus the next two years, first in Hattiesburg and then in Starkville in 2019.

“It feels good to get this one,” Southern Miss pitcher Taylor Braley said. “We won some games this year where we don’t play our best. We play good to start the game and then slack off at the end.”

Braley went seven innings and did not walk a batter, but did give up nine hits. He struck out four.

Braley allowed two runs through the first seven innings, but got roughed up in the eighth. He gave up three consecutive singles to start the inning and was replaced by Trent Driver. That was the first of three pitching changes Southern Miss made in the inning.

Hunter Vansau delivered an RBI single, and another run scored on the play from fielder’s interference. Josh Lovelady also singled in a run to cut the Bulldogs’ deficit to 7-5 before Colt Smith finally got out of the inning.
Matt Wallner, USM’s starting center fielder, took over on the mound in the ninth and retired the side in order to earn his second save of the season.

Fortunately for the Golden Eagles, Mississippi State’s rally in the eighth inning was an effort to climb out of a big hole it dug for itself early in the game.

Donaldson delivered a two-out single to score two runs in the first inning, and Braley helped his own cause with an RBI double.

LeeMarcus Boyd had an RBI single and Burdeaux a two-run double to key the three-run rally in the third inning.

Four MSU relievers held the line after that. Graham Ashcraft, Trysten Barlow, Cole Gordon and Jacob Barton only allowed one hit and two walks while keeping Southern Miss off the board over the last five innings.

Offensively, Brent Rooker had an RBI triple for the Bulldogs, and Lovelady was 2-for-4 with an RBI and a run scored. Tanner Poole and Cody Brown each had two hits and scored a run.
Mississippi State lost its fourth consecutive game.

“This was a tough defeat for us,” Mississippi State coach Andy Cannizaro said. “I was proud of how we battled. The bullpen did a great job of keeping the score where it needed to be to give us a chance.”

Trent Turner hit a walk-off RBI single in the 11th inning to give Memphis a win over Ole Miss.

Memphis led 1-0 for the majority of the game, after scoring a run in the fourth inning. Tyler Webb, who finished 4-for-5, led off with a double and moved to third on a wild pitch. Turner drove him in with a groundout.

Ole Miss tied it in the ninth, when Tate Blackman was hit by a pitch and scored from first on a double by Colby Bortles.

Memphis starting pitcher Jonathan Bowlan was outstanding, tossing a career high 8 1/3 innings and striking out eight batters. He allowed just four hits and was perfect through the first 3 2/3 innings.

Ole Miss used six pitchers. Sean Johnson got his first career start and allowed one run in four innings, and wound up with a no-decision. Reliever Andy Pagnozzi (2-1) took the loss.