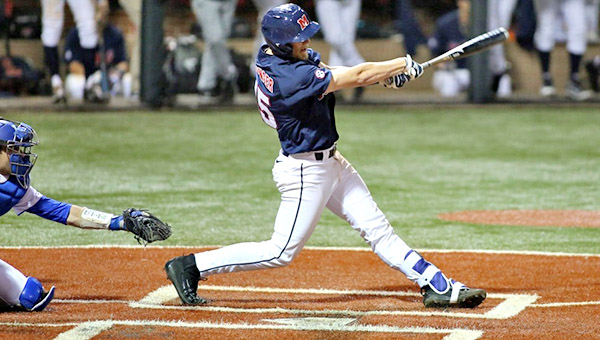 Ole Miss’ Grae Kessinger connects for a hit Thursday against Kentucky. Kessinger went 3-for-4 with a home run and three RBIs as the Rebels won 9-6. (Barry Westerman/UK Athletics)

LEXINGTON, Ky. — Ole Miss’ offense is still sputtering like a lawnmower that’s been in the shed all winter, but occasionally — like in Thursday’s series opener against Kentucky — it comes roaring to life.

The Rebels scored six runs with two outs in the sixth inning to blow the game open, and went on to beat Kentucky 9-6 in game one of a three-game Southeastern Conference series. Thomas Dillard and Will Golsan each had a two-run double during the rally that featured seven consecutive hits and left Ole Miss with an 8-1 lead.

Grae Kessinger was 3-for-4 with a home run, two RBIs and two runs scored. He hit a two-run home run in the third inning to put Ole Miss ahead 2-0.

Golsan and Dillard each had two hits and two RBIs, and Cooper Johnson was 2-for-3 with a double, RBI and two runs scored. The Rebels finished with six extra base hits, including five doubles.

Ole Miss added an insurance run in the eighth inning when Johnson doubled and later scored on a wild pitch. The Rebels, for a moment, looked like they might need it.

Kentucky rallied to score five runs in the bottom of the eighth. T.J. Collett hit a pinch-hit grand slam to pull the Wildcats within 9-6. It was the first hit of the freshman’s college career.

They got another runner on base, but Ole Miss closer Dallas Woolfolk escaped the jam and then retired the side in the ninth to earn his sixth save of the season.

Starter James McArthur (5-1) earned the win. He allowed one run in five innings. He gave up five hits and a walk, and struck out four. McArthur had missed the last two weeks with a mild forearm strain.

Ole Miss and Kentucky will play game two of their three-game series Friday at 5:30 p.m.