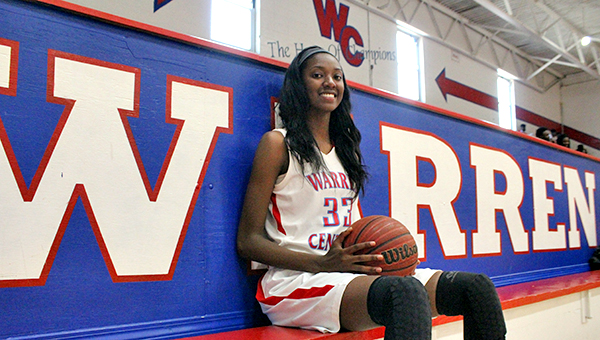 There were stretches this season where it appeared any one of a half-dozen members of Warren Central’s girls basketball team could become the Vicksburg Post’s Player of the Year.

When the dust settled and the season was over, however, there was one player who literally stood head and shoulders above the rest.

Amber Gaston, Warren Central’s 6-foot-3 junior center, took the honor. She led the team in scoring (12.1 points per game) and rebounding (5.1 per game) and dominated the post by averaging 3.1 blocks per game. She was the most consistent player on one of the best teams in Class 6A, and is now the first WC player to win the Post’s Player of the Year award since 2009.

“It’s an honor. It’s very motivating, as well,” Gaston said. “I’m glad I never stopped trying, never quit or gave up, kept a positive attitude even when I was down in the dumps. Basketball has been my outlet. Being Player of the Year motivates me and makes me want to push harder.”

Gaston’s development into a top player has been an evolution. She averaged just 3.3 points per game and 2.2 rebounds as a freshman, and then doubled those numbers as a sophomore.

This season she only had four double-doubles — including an odd one with 13 points and 10 blocks in the Jackson Public Schools Tournament championship game against Jim Hill in December — but scored in double figures in 20 of the Lady Vikes’ 30 games.

“I’ve come a long way from averaging two points my freshman year,” Gaston said with a smille. “Each summer I was working hard, training and playing travel ball. That definitely contributed to my growth. I knew I had to progress for the team and Coach Glass. I’ve got one more year and have to make it one of my best.”

Even more than her offense, Gaston was a dominant force on the defensive end. She had at least two blocks in 23 of 30 games and four or more nine times. With her blocking shots and holding opponents to one shot with her excellent rebounding skills, Warren Central allowed a mere 36 points per game.

Coach Jackie Martin-Glass said just having Gaston in the post changed the way opponents played against the Lady Vikes.

“Consistently having a presence in the middle is something you have to have,” Martin-Glass said. “Every good team we play has some bigs. In her position she’s valuable because she’s really the only player I had over 6 feet. She changed shots, blocked shots. Even if she wasn’t scoring she was affecting the other team.”

As she heads into her senior year, Gaston is trying to continue the evolution of her game. She’s on the recruiting radar of several Division I programs including Mississippi State, Alabama and Georgia.

“That was one of my goals going to my sophomore year. I want to win an SEC championship,” Gaston said. “I may not be ready for it right now, but I’m preparing myself. That is my goal.”

To become a more complete player at the next level, she plans to work on a mid-range jumper this offseason and work it into her offensive arsenal.

That’s one small example of the work ethic, awareness and intelligence that has made her into one of the state’s top juniors. In addition to her impressive basketball stats, Gaston has a 3.8 GPA.

“Amber is a smart person,” Martin-Glass said. “She has a great GPA, is a hard worker, and wants to learn. That carries over to her game.”