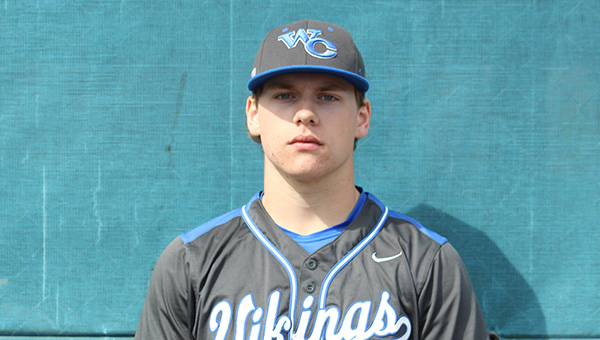 Warren Central’s Sean Daily went 3-for-3 with a double, but the Vikings lost 5-1 to Clinton on Tuesday.

Considering the topic, it seemed appropriate that Warren Central baseball coach Conner Douglas was able to sum up Tuesday’s game with Clinton in two quick sentences.

“Timely hitting,” Douglas said. “They got ‘em, we didn’t, and that was the difference.”

Clinton scored all of its runs with two outs, including a couple that took advantage of mistakes by Warren Central, and beat the Vikings 5-1 Tuesday night.

Warren Central (9-8, 4-1 Division 4-6A) had its 14-game winning streak inside of Division 4-6A snapped — it hadn’t lost since its final division game against Greenville in the 2015 season — and forced the Vikings into a do-or-die situation when the teams play again Friday in Clinton.

A win by Clinton (11-5, 5-0) on Friday would clinch the season series, as well as the division title in almost all likelihood. If Warren Central wins, the division title would be settled during their third meeting April 11 back in Vicksburg.

Douglas said his team’s approach will be similar to a best-of-three playoff series.

“We still have a dog in that race. Our back’s against the wall a little, but it’s one game at a time. There’s no better lesson for our young guys than to have to fight like there’s no tomorrow,” Douglas said. “The plan is to win Friday and force that fun Game 3 that competitors love. That’s what’s fun about this series. It’s a playoff-type intensity and competition, just not to the extent of the season being over.”

After Warren Central got a run back in the third inning, Des Baker delivered — what else? — a two-run double in the fifth to make it 5-1.

The Vikings had chances to get back in it. Four of the six runners they left on base in the game were in scoring position, and they also hit into one double play.

Sean Daily finished 3-for-3 with a double for WC, and D.J. Lewis and Logan Stewart also had doubles. Lewis scored the team’s only run, on a sacrifice fly by Vantrel Reed.

“It’s tough to swallow, but the silver lining is that we have them out there,” Douglas said of the missed opportunities to score runs. “Once we start getting those big hits, they are contagious. We are right there. Just have to get over the hump, and once we do we can be dangerous.”

During its losing streak, Vicksburg had scored a total of 17 runs. It nearly got that many on Tuesday, even if it took a while to fully break through.

The Gators led 6-3 through five innings, then exploded for nine runs in the top of the sixth to win the game via the mercy rule. McCaplin had two RBI singles in the sixth inning, three runs came in on bases-loaded walks and another on a hit batter, and Luke capped things off with a two-run single.

St. Al never trailed, but did have to sweat out a late surge by Manchester. The Mavericks scored four runs in the fifth inning to cut a five-run deficit to one, 6-5. St. Al answered with two runs in the sixth inning, including one on an RBI single by Middleton, to push it back to 8-5.

Breithaupt pitched 4 1/3 innings to earn the win, and Middleton worked the seventh for the save. St. Al and Manchester play again Friday, in a doubleheader at Manchester.