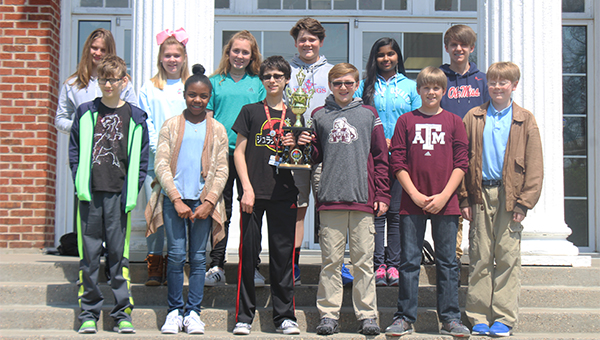 Fifteen students from the Academy of Innovation and Vicksburg Junior High School have advanced to the state science fair at Mississippi State University after placing at the MSEF Region II Science Fair at Jackson State University last Friday.

Frank Bradley will represent Vicksburg Junior High after winning first place in the engineering category at the fair.

“My project ‘Try before you buy’ is to educate people on how to build electronics out of home materials,” Bradley said. “I built a portable speaker out of two cups and a paper towel roll. I built a projector out of a box and a magnifying glass.”

Marin Sherwin and Paula Meer will represent the Academy of Innovation after placing first and second respectively in the microbiology category. McLaurin Truesdell and Landon Cessna will compete in the biochemistry division after finishing first and second.

Tyler Smith and Landon Stanchfield placed first and second in the physics and astronomy division to advance to the state fair.

“I wanted to figure out what kind of golf balls went the farthest by creating a contraption that would launch golf balls,” Smith said. “I had 14 balls and I hit all 14, and after I did that I went out in my yard and measured how far they went from the launcher.”

Mayson Shealy won the robotics and intelligent design division for his bristlebot.

“It was light sensing on the front and had a mini breadboard so it all worked,” Shealy said. “Then, I would shine a flashlight on each side and it would follow.”

The state science fair will be held Wednesday, April 5 at Mississippi State University.