Bulldogs come back to beat Rebels 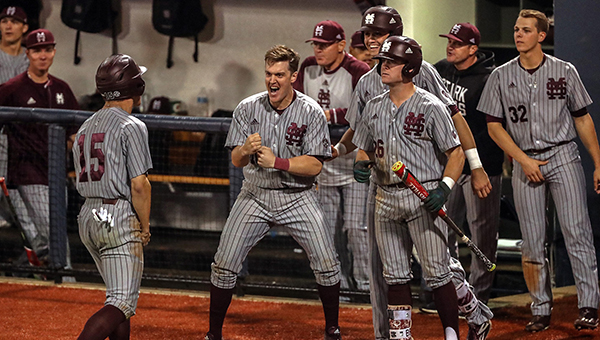 Mississippi State’s Jake Mangum (15) is greeted at the dugout by his teammates after scoring a run Thursday against Ole Miss. Mangum had two hits and scored twice as Mississippi State rallied from a three-run deficit to win 4-3. (Joshua McCoy/Ole Miss Athletics)

OXFORD — Mississippi State was sluggish and seemingly headed for a loss for six innings Thursday night against Ole Miss.

A couple of two-out rallies later, and it was flying high with a come-from-behind victory.

The Bulldogs scored three times with two outs in the seventh inning to wipe out a three-run deficit, and then scored the winning run when Jake Mangum scored on a dropped third strike in the ninth as they rallied to beat the Rebels 4-3.

The Bulldogs (17-10, 4-3 Southeastern Conference) won their fifth straight game overall and fourth straight SEC game. They have come from behind to win 10 times this season.

“What a win this was,” Mississippi State coach Andy Cannizaro said. “We talk all the time about playing nine full innings of baseball. We did a lot of things great there at the end of the game. This win feels like two wins. It was a team win and a great way to start the series.”

Brent Rooker had a two-run double in the seventh inning for Mississippi State, and Cole Gordon had an RBI single to tie the game.

Gordon was also at the plate with two outs in the ninth and Mangum on third base. Gordon struck out, but the ball got past Ole Miss catcher Cooper Johnson and Mangum raced home with the go-ahead run.

Mangum finished the game 2-for-4 with a double and two runs scored.

“Both teams played really hard and brought their A-games,” Cannizaro said. “We feel very fortunate to come out with a win. Our bullpen was outstanding.”

A bit shaky in the ninth, but outstanding nonetheless.

Riley Self allowed a leadoff walk, and an error and a sacrifice bunt put runners at second and third with one out for Ole Miss (16-10, 3-4) in the bottom of the ninth.

Self struck out Ryan Olenek tand then gave way to closer Spencer Price. Price intentionally walked Tate Blackman — who had already reached base three times, including with a two-run triple in the fifth inning — and then struck out the Rebels’ clean-up hitter Colby Bortles on three pitches to end the game.

Self (4-0) pitched 2 2/3 innings of scoreless relief to earn the victory. Price picked up his seventh save of the season, which leads the SEC.

“Self was terrific at the end the last two innings. The right-handers really struggled with him,” Ole Miss coach Mike Bianco said.

Blackman had two of Ole Miss’ four hits. He led off the fourth inning with a walk and scored on Thomas Dillard’s double to help give Ole Miss a 3-0 lead.

All three of Ole Miss’ runs were scored against MSU starter Konnor Pilkington. The Bulldogs’ bullpen — Self, Price, and middle relievers Jacob Barton and Trey Jolly — combined to throw four shutout innings, struck out six batters and walked three while only giving up one hit.

Game two of the three-game series is Friday at 6 p.m. The series finale is Saturday at 1:30 p.m.

Brigham Hill didn’t allow a runner to reach second base in his eight innings of work as Texas A&M toppled LSU in their series opener Thursday at Alex Box Stadium.

Hill (5-2) and Mitchell Kilkenny held LSU to four hits. Hill scattered three hits and two walks while striking out seven. Kilkenny worked the ninth, but was not in a position to earn a save after the Aggies scored twice in the top of the inning to take a 4-0 lead.

Cole Bedford drove in the two ninth-inning runs with a single.
Hill outdueled LSU’s Alex Lange, who was just as good but gave up a two-run home run to Nick Choruby in the fifth inning and took the loss.