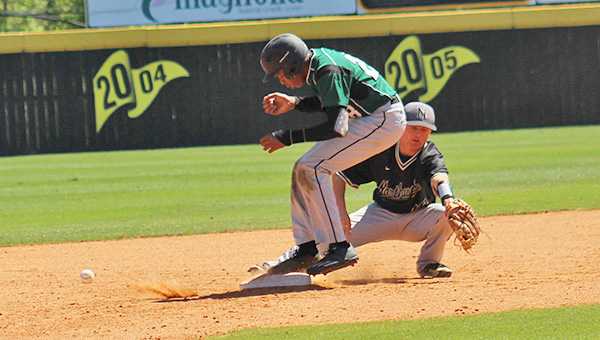 FLOWOOD — All in all, it was a pretty good week for the Vicksburg Gators.
They snapped a losing streak, picked up a couple of wins within their division and clinched a berth in the Class 5A playoffs.

The week was good. The weekend, not so much.

Ty Riche went 4-for-4 with a double, two RBIs and three runs scored, and Northwest Rankin scored 10 runs in the second inning to hand the Gators a 16-0 loss Saturday afternoon.

The Gators (5-11) were playing without four starters who were absent for a variety of reasons and committed six errors.

“We had four starters out, but that’s no excuse. You’ve still got to play baseball,” Vicksburg coach Derrick DeWald said. “We’re still looking for that starting nine. I feel like we have a few good pieces, but when you’ve got a guy out the next guy has to step up.”

Northwest Rankin (15-3) scored three runs in the first inning and then blew it open in the second. Two singles, an error and a sacrifice fly led to the Cougars’ first two runs. Three walks, two hit batters and an RBI single by Riche kept the runs coming, with Riche’s hit making it 9-0.

Two more runs scored on an error, and Justin Johnson finished the 10-run outburst with an RBI single.

“They put a few balls in play, we made some errors and the next thing you know it’s 9-0,” DeWald said. “I had a few guys that stayed with me and kept fighting. But as a collective unit we did not have that. Against good teams like this, you have to have that. Then when you look up you’re in the fifth or sixth inning and it’s a close game.”

Weston Fortenberry went 2-for-3 with three RBIs and two runs scored for Northwest, while Tyler Kersh drove in two runs and scored two.

Vicksburg only had two hits and struck out 10 times against pitchers J.T. Carney and Chase Harsy. Chris

Farrish had a single in the first inning, and Chandler Luke doubled in the third.
The Gators will host Neshoba Central Tuesday at 7 p.m. They can’t win the Division 4-5A championship, but can still move up to second place by getting on a late-season winning streak.

Coming off a tough division loss to Clinton, the Vikings rallied for two runs in the bottom of the seventh inning to earn a walk-off victory over Germantown. Landon Stewart brought in the tying run with a sacrifice fly, and Sean Daily won it with an RBI double.

Logan Stewart’s double started the winning rally. He went to third on a bunt single by D.J. Lewis and then scored on his brother Landon’s fly ball to center. After Vantrel Reed was hit by a pitch, Daily doubled to left field to score Lewis from second with the winning run.

Warren Central snapped a three-game losing streak, its longest of the season.