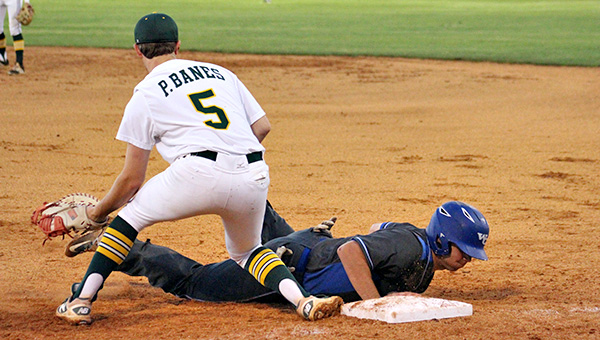 A couple of days after winning with a walk-off hit, Warren Central’s baseball team sidestepped an opponent trying to do the same.

Peyton Banes hit a two-run home run in the bottom of the seventh inning to pull Central Hinds within a run, but relief pitcher Morgan Jarabica regrouped and retired the side to send the Vikings home with a 6-5 victory Monday night.

It was the second one-run win in a row for Warren Central (11-9). It beat Germantown 5-4 on Saturday on Sean Daily’s walk-off double.

“We are finding ways to win,” Warren Central coach Conner Douglas said. “The early-season woes are paying off and guys are really playing together as a team right now. We still need to deliver that final blow when we have a chance, but we’re very satisfied being on this side of it against two quality opponents.”

Warren Central took the lead for good in the fourth inning by scoring three runs, with a leadoff single by Caleb Sterling the only hit. Two walks, two errors, a hit batter and a balk that brought a runner home from third spurred the rally along and left the Vikings with a 4-2 lead.

After Will Neely led off the bottom of the fourth with a solo home run, the Vikings struck for two more runs in the fifth. Tyler McRight had an RBI single and Shakee Shaw scored on a double steal to make it 6-3.

Jarabica entered the game in the sixth and retired the side in order. He walked Beau Coumbe to lead off the seventh and then surrendered the home run to Banes that pulled the Cougars within a run, at 6-5.

Jarabica collected himself and got two groundouts and a fly out to end the game and earn the save, however.
“We’ve been in those games all year. We just restarted with a one-run lead,” Douglas said. “Jarabica has thrown great all season in tough spots and did it again tonight. He has ice water in his veins. He made pitches. I’m proud of him.”

Daily went 2-for-4 with a run scored.Landon Stewart had two hits and drove in a run.

Warren Central will go back to Raymond Thursday night to play Raymond High School, and then hosts Division 4-6A rival Greenville on Friday. It’ll wrap up the week with a game at Madison Central Saturday at noon as it tries to build some momentum heading into the homestretch of the regular season.

The Vikings have alternated brief winning and losing streaks throughout the season, but Douglas believes that’s the sign of a young team preparing to peak at the right time.