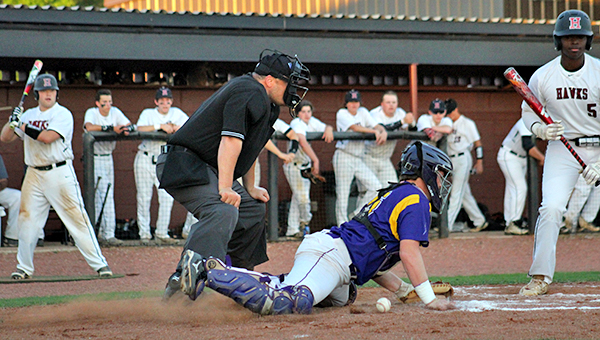 Early deficit, missed opportunities too much for St. Al to overcome

FLOWOOD — The St. Aloysius Flashes spent a lovely spring evening beating their heads against the wall.

The Flashes fell behind by six runs in the first two innings, clawed their way back into the game, and then misfired on several chances to tie or take the lead in the later innings and ultimately lost 6-4 Tuesday to Hartfield Academy.

St. Al stranded eight runners in scoring position, including five in the last three innings, and also had a runner thrown out at home plate.

“Right now, we just don’t have a killer instinct. Until we have some guys step up and say enough is enough, things won’t change,” St. Al coach Sid Naron said. “As a man, within the game of baseball, you have to find a way through adversity because this game will hit you in the face. And we’ve been hit in the face here recently. We haven’t responded as well as we’d like. It’s never fun losing. But I still feel like this team has got an opportunity to turn things around.”

The loss didn’t cripple St. Al’s playoff chances, but it didn’t help either. St. Al (13-4, 3-4 District 3-AAA) and Hartfield (7-6, 3-4) are among a pack of teams chasing a berth from District 3-AAA. They’ll play a doubleheader Friday at Bazinsky Field, beginning at 4:30 p.m., that could eliminate one of them from contention.

“We’re still in the hunt. We’re going to have to beat them. We’ve got to play really well going through. It’s going to be tough,” Naron said.

St. Al came out flat in Tuesday’s first meeting with Hartfield and dug itself a hole it never was able to crawl out of.

The Hawks scored two runs in the first inning and then four more in the second — three of them on a double into the left field corner by Ryan Holifield — to take a 6-0 lead. St. Al committed two errors in the second inning, and starting pitcher Garrett Breithaupt walked one batter and hit two others before giving way to his cousin Tyler Breithaupt after just 1 2/3 innings.

Tyler Breithaupt got out of the second-inning jam, struck out six of the first nine batters he faced, and only allowed one ball out of the infield in 3 1/3 innings of stellar relief work.

“(Tyler Breithaupt) made some big-time adjustments from his last outing. It was exactly what we needed,” Naron said.

Breithaupt’s stint gave the Flashes a chance to shake off their early-inning doldrums and get back into it — which they quickly did in the top of the third inning.

St. Al scored three runs in a span of four pitches to chop its six-run deficit in half. Kieran Theriot and Thomas Trichell singled, and both scored on a triple by Josh Collins. Collins then scored on a sacrifice fly by Landon Middleton to cut it to 6-3. All four batters swung at the first pitch they saw.

That third-inning flurry turned out to be the Flashes’ high water mark. They spent the rest of the game putting runners in position to score and then not sealing the deal.

Justin Ehrgott was thrown out trying to score on a fly ball to end the fourth inning with a double play. They got one run in the fifth inning but left another runner at third base. Twice in the fifth inning, Naron started to send runners toward home but had to hold them at third when the ball got back to the infield quicker than expected.

The Flashes left the bases loaded in the sixth inning and had a crucial bunt single wiped off the board. Collins laid a perfect bunt down the third base line and legged it out for an apparent hit, but was called out for stepping on home plate as he bunted the ball. It would have loaded the bases with no outs.

St. Al got runners at second and third with two outs in the seventh and then left them there. Hartfield reliever Aden Clark struck out four batters in the last 1 2/3 innings, including two on six pitches to end the sixth and James Trichell to end the game.

Trichell’s game-ending strikeout was a foul tip into the mitt of catcher Chase Yearwood, serving as one last tease in an agonizing loss.

PEARL — Tuesday’s match against Pearl was really just a tune up for the St. Aloysius tennis team. It hardly... read more