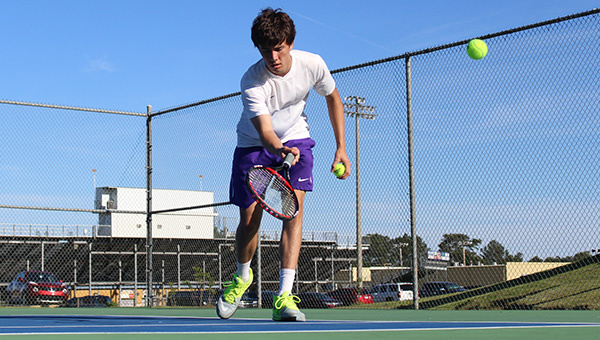 PEARL — Tuesday’s match against Pearl was really just a tune up for the St. Aloysius tennis team. It hardly meant it couldn’t enjoy the ride.

The Flashes dropped a total of 10 games and no sets in sweeping the singles and girls doubles points, and added one more victory in mixed doubles for good measure as they beat Pearl 5-2.

St. Al improved its season record to 6-1 and picked up a bit of steam heading into a key District 3-AAA match with Manchester Academy Thursday at 3 p.m. in Yazoo City.

“It’s the two top teams in the district, last year and this year. We’re in for a battle with them for sure,” St. Al coach Rick Shields said. “It’ll help us get ready for the district tournament and everything else. They’re good, and we need to be competitive.”

Adrienne Eckstein rolled to a 6-1, 6-0 victory over Brooklyn Massey in girls singles to remain undefeated this season. The girls doubles teams of Allie Falls and Ann-Stewart Piazza, and Ashley Jarratt and Taylor Chewning had a similarly easy time.

“It was a good match. I got to hit a lot. She was consistent with hitting it back. It was good practice,” Eckstein said.

Braxton Chewning had a bit tougher time with Josef Rutledge, but still won in straight sets 6-2, 6-3.

“Braxton played a tough match against a good young player. It was one of those matches where he exercised a lot of patience. Everything he hit came back to him,” Shields said.

Chewning’s victory clinched the team win for St. Al, even though the mixed doubles match slogged on for another hour. Elise Piazza and Carson Collier finally subdued Pearl’s Kyle Morgigno and Daniela Avelar 7-6, 6-3.

Both of Pearl’s points came in boys doubles. Trey Hilton and Lucas Smith beat St. Al’s Jackson Oaks and Adam Eckstein 6-2, 6-3 in the No. 1 position. In No. 2 doubles, Dillon Hayes and Kolby Burns beat Ryan Jarratt and Ethan Naron 6-1, 6-3.

Solid effort not enough for Gators