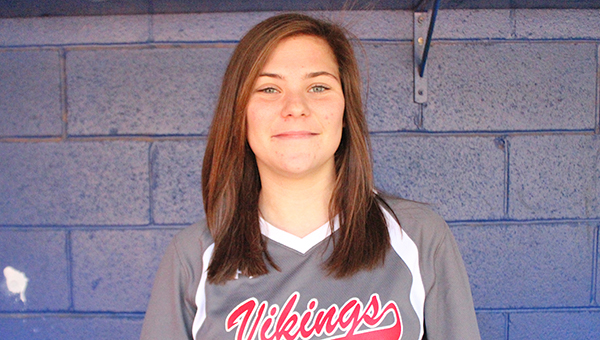 Warren Central softball player Morgan Stewart had four RBIs and scored four runs in a 26-0 win over Greenville on Tuesday.

Warren Central’s softball team spent longer driving to Greenville than it needed to beat Greenville.
The Lady Vikes scored 11 runs in the first inning, a dozen more in the second, and crushed Greenville 26-0 on Tuesday.

The game lasted just three innings because of the mercy rule. The Lady Vikes only had six hits, but drew 10 walks and took advantage of six errors by the Honey Bees to rack up the runs.

Kelsey Lockridge and Megan Stewart each had three RBIs.

Warren Central will play at Clinton Thursday at 6:15 p.m.

Sydnee Pawlak pitched a five-hit shutout, and helped her own cause by getting two hits and scoring a run at the plate as Ridgeland beat Vicksburg 7-0 in softball Tuesday night.

Pawlak walked three batters and struck out seven to stymie a feisty Vicksburg squad. The Missy Gators stayed in the game by turning five double plays, and had plenty of runners but stranded eight of them.

Jessica Hamer went 2-for-4 with an RBI and two runs scored for Ridgeland (4-8, 2-0), while Jadan Brice also had two hits and two RBIs.

Ridgeland clinched the Division 4-5A championship with the victory, but since it and Vicksburg are the only two teams in the division both will advance to the Class 5A playoffs. Vicksburg will be a No. 2 seed and will face the third-place team from Division 1-5A in a first-round series April 21 and 22.