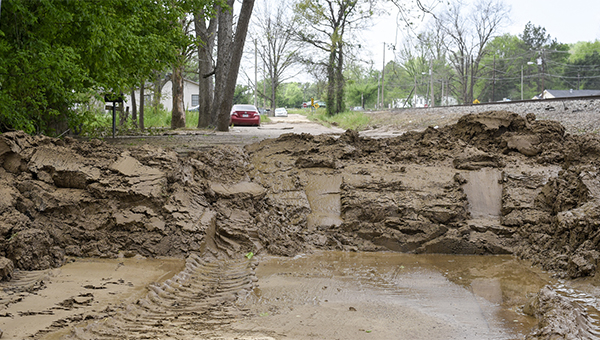 An area on Hutson Road is seen covered with mud following storms on Saturday night. The Vicksburg Street Department is working to clear the street. (Courtland Wells/Vicksburg Post)

The torrential rains and flooding from Sunday’s storm may be a memory for area residents, but the storm’s effects are still visible to anyone driving north on North Washington Street or through sections of the Kings community.

Landslides still block the northbound right lane of North Washington from the Klondyke to the U.S. 61 bypass. In some slide areas, entire sections of a ridge, including trees, are either near or partially in the road. In one area, a drainpipe is exposed, and in some areas the dirt and rock continue to fall.

Thick dirt and mud cover areas along the west side of Hutson Street and the railroad tracks splitting the east and west sides.

City street crews Wednesday were tying to remove mud from a section of Hutson.

North Ward Alderman Michael Mayfield, who is over public works and represents the Kings area, said the area of North Washington from the Klondyke north, including Kings, is the worst hit area.

“It’s (the mud and water) inundated streets such as Stouts Springs Road, Hutson Street and several other streets on the west side of Washington Street,” he said. “We are vigorously trying to get up there and clean all these areas up.”

But the cleanup, he said, is hampered because some of the streets still have water under the mud, making for a gooey mess that sticks to the buckets of the track hoes and backhoes, and prevents operators from discharging the muck into a dump truck.

“It’s slowing up progress, but we’re working as hard as we can to get those streets cleared up,” he said. “Once we get the mud and debris up, we’re going to come back with street sweepers and try to clean those areas up.”

The slides on North Washington, Mayfield said, have been a longtime headache for the city. The problem, he said, is the ridges are cut straight down, causing soil to break off in chunks when hit by heavy rains.

“We still have to deal with that,” he said. “I saw a problem this morning that wasn’t there when I passed by it at 7 Tuesday evening, so we still have areas breaking off on that side.”

He said city officials have examined possible solutions to prevent slides, like a bulkhead system, “But you would have to do that literally from the edge of town practically all the way to the bypass. You’re talking millions of dollars to ever do that, and the thing is going to be getting permission and easement from the (Vicksburg National) Military Park and private landowners.”

“All you can do is your best to maintain your right of way,” he said. “We’ve got some serious stuff that’s going to happen over there and I’m in constant prayer that we don’t get another full day of torrential rain, because if we do, we’re going to have some very serious problems.

“This is a very serious problem, and I don’t want to minimize it.”

A Vicksburg man was in fair condition at University of Mississippi Medical Center Thursday after a fiery wreck Wednesday evening... read more