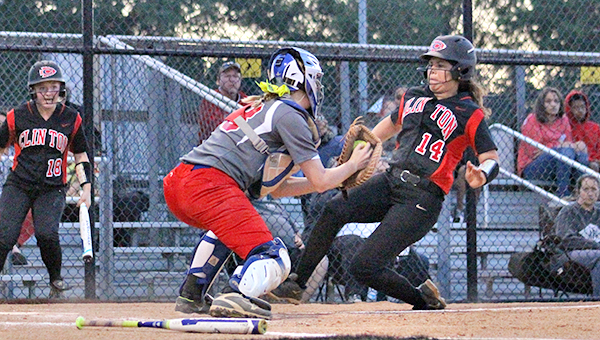 Clinton’s Grace Whitworth (14) slides into the tag of Warren Central catcher Sarah Kate Smith on a play at the plate in the fifth inning Thursday. Whitworth was out to complete a double play, but Clinton went on to win the game 2-1. (Ernest Bowker/The Vicksburg Post)

Clinton scored twice in the fifth inning to win 2-1 and officially clinch the Division 4-6A championship it had all but secured a week ago. The Lady Arrows beat Warren Central by eight runs in their first meeting, and WC needed to equal or surpass that margin to take the title.

Considering the obstacle in front of them, the Lady Vikes (9-8, 3-2 Division 4-6A) were satisfied with a competitive showing against a quality team that has vexed them for years. Thursday’s win was Clinton’s 16th in a row in the series.

“We just have a problem with the name on the jersey sometimes. But this game we played a lot better than we have in the past against them,” said Warren Central catcher Sarah Kate Smith, who was 2-for-3 with two singles. “We all came out with a positive attitude, and just didn’t think about necessarily winning the game, just giving 100 percent throughout the whole entire game and getting done what we had to get done.”

Clinton (12-8, 6-0) had won four of the last five games in the series by five runs or more, but Thursday’s game was tight and tense the entire way. Neither team pushed a runner past first base until the fourth inning, and no one scored until the fifth.

Katelyn Hayman led off the bottom of the fifth with an infield hit, moved to second on a throwing error on the play, and scored on a base hit by Grace Whitworth to break the deadlock.

Clinton loaded the bases with no outs, but Warren Central caught a break when Katlyn Lott flied out to center. Kaitlyn Mitchell came up throwing and cut down Whitworth at the plate for a double play and the first two outs of the inning. Unfortunately, Morgan Dubose followed with an RBI single that put the Lady Arrows up 2-0.

“They got a couple of hits when they needed them and were able to score a couple of runs. That’s going to happen sometimes. Just the fact we were able to come back and get out of that inning with them only scoring two runs was a big plus,” Warren Central coach Dana McGivney said.

Warren Central’s scoring opportunities were few and far between. Kelsey Lockridge doubled with one out in the fifth inning, but was called out for not returning to second base between pitches. Rules require runners to advance or return to their previous base once the pitcher returns to the circle.

A dropped fly ball in deep center field put Mitchell on third base to start the seventh inning and she scored on a ground out by Ashley Coley to pull the Lady Vikes within a run. The next two batters were retired without incident, however, and Clinton got away with the hard-fought victory.

“I think both pitchers pitched well tonight, and defensively both teams played well. You can’t ask for anything better than that,” McGivney said. “Any time it’s competitive, it’s fun. You want your kids to be excited, and as a coach in a game like this it’s real easy to get excited when your kids make plays and step up and do the things they’re supposed to it makes it a lot more fun.”