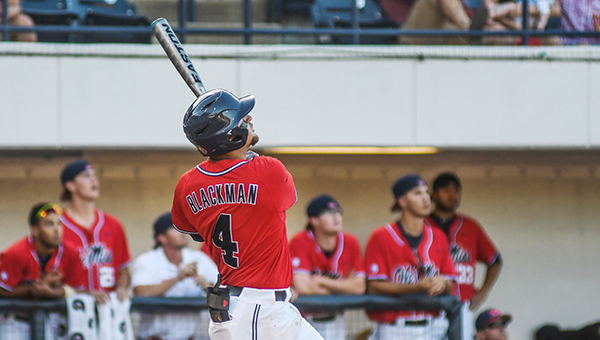 Blackman hit a walk-off solo home run with one out in the bottom of the ninth inning to give the Rebels a 5-4 victory over Alabama.

Connor Short homered in the fourth inning to help Alabama build a 4-1 lead. Ole Miss tied it with three runs in the bottom of the sixth, however. Nick Fortes hit an RBI single, while Cole Zabowski and Grae Kessinger hit sacrifice flies.

The game stayed tied until the ninth. After Kessinger grounded out, Blackman lifted a 1-1 fastball from Garrett Suchey just over the wall in left center field for the game-winner.

It was the only run and second hit Suchey (1-4) allowed in 3 1/3 innings of relief. He walked two batters and struck out two.

Fortes finished with three hits for the Rebels, while Will Golsan had two hits and Tim Rowe scored two runs.
Chandler Taylor was 2-for-4 with a double and two runs scored for Alabama.

Rooker finished 4-for-4 with six RBIs. In addition to his grand slam, he hit solo home runs in the fourth and sixth innings.

Cody Brown also hit a solo homer in the second inning for the Bulldogs, and Ryan Gridley drove in two runs with a single in the eighth.

Mississippi State and Kentucky will finish their three-game series Sunday at 1 p.m. at Dudy Noble Field.