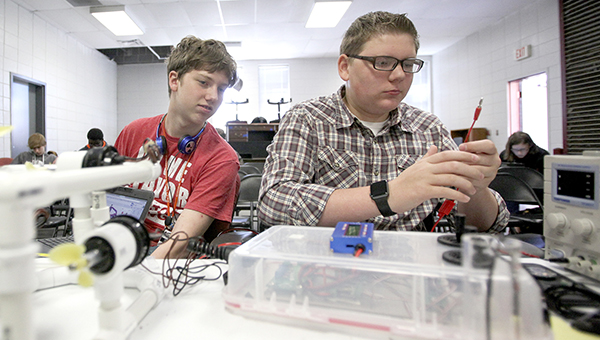 Students at River City Early College will compete in their first underwater robotics competition April 21-23 in Dauphin Island, Ala. The ROV club includes 20 students, and they have been working since January on their robot.

“We had two different designs for the frame,” math teacher and ROV mentor Karin Marshall said. “We bought a kit so that was our starting place, because this is our first year. They’ve been putting in a lot of hours”

The students had to build a robot capable of performing multiple tasks underwater including lifting and moving items and turning a wheel. The students also receive extra points in the competition for building a robot under certain size requirements.

“They will control it,” Marshall said. “They will pilot it going down and doing all the different little tasks.”

The robot will have two cameras mounted on it that the students will use to pilot it during the competition.

“We are setting up cameras because we are not allowed to tell them what’s in the pool,” Marshall said. “They have to see it from the ROV.”

Students will control the robot from the surface and it will be connected via a tether that includes power cords and the cameras’ hookups. The robot has the capability to move up and down in the water, to crab walk left to right and turn as it goes forward and backwards.

As part of the competition, the students also have to create 3D models of their frame design and build a PowerPoint to use with a marketing display. They will also have to answer questions during a judging panel.

In the water, they will have five minutes to complete as many tasks as possible with points awarded for speed of completion.

The ROV club is made up of ninth graders from River City Early College’s inaugural class.

“I’ve been doing robotics for three years now and ever since I learn something new,” club member Curtis McCune said. “This is my first time doing underwater robotics. Everything else was on land. It has all taught me something new and how to work around problems.”

McCune said one of the major changes from land-based robotics to underwater is worrying about electrical hazards. The YMCA has given the club permission to use their pool to test the robot and practice the tasks before the competition.